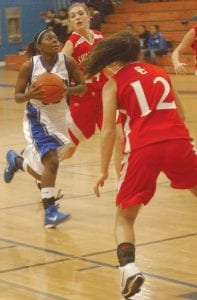 But you can check that one off the list now.

Jasmine Boyd scored on a putback with four seconds left and Carman-Ainsworth edged Howell, 62-61, in a nonleague thriller Monday night at home.

The victory lifted the Lady Cavs to 3-1 on the season, with their only loss a 50-48 heartbreaker against Grand Blanc. If there was any doubt about their ability to handle the pressure of a close game, the Lady Cavs erased it by pulling out the victory against the Lady Highlanders.

After freshman Aliah Stinnett missed the second of two free throws with six seconds left, the rebound was tipped a couple of times before Boyd grabbed it and went straight up for the winning layup.

“I had a combination of starters and subs on the court that I felt were focused and could do the job,” said Lady Cavs’ coach Johnese Vaughn. “And I told Jasmine to keep her butt down low for the rebound.”

Boyd finished with 14 points, and Tiara Gooch also scored 14 as all 12 Lady Cavs got in the game and eight of them scored. Jasmine Jones added 13 points and Kapri Thompson had nine. Stinnett was strong on defense with six steals and two blocked shots.

“We don’t have any dominant superstars. We are one team and have to play as one,” said Vaughn. “We have a mix of experience, and I’ve had to promote some girls and take some chances. But I think I’m built for that, because I was one of those players, a younger player that played varsity.”

In their first home game on Dec. 2, the Lady Cavs rolled past neighboring rival Swartz Creek, 66-50. Boyd scored 13 points, while Thompson and Jones added 12 each as all 12 Lady Cavs played and 11 scored.

Carman-Ainsworth stormed out to a 25-5 first-quarter lead as its pressure defense forced a rash of Creek turnovers. But the Lady Dragons adjusted to the press and chipped away at the deficit until they were within seven points, 33-26, with 5:10 left in the third quarter.

It was still an eight-point game, at 45-37, after three quarters, but Carman-Ainsworth pulled away with a 21-13 final period.

Tomlin and Ashley Hall added six points each for Carman-Ainsworth and Gooch and Tierra Mitchell had five apiece in the balanced offense.

The Lady Cavs are slated to host Royal Oak Shrine tonight and will visit Beecher on Monday and Hartland on Tuesday.