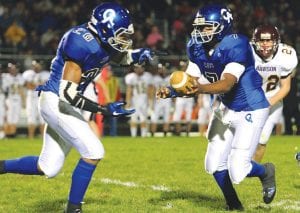 FLINT TWP.
— Carman-Ainsworth’s football team nearly pulled off a late rally for the second week in a row last Friday.

If only the Cavaliers could have gotten their hands on the ball the last five minutes, they might have done just that.

Carman pulled within 18-16 of Davison with 4:56 to go in their Big Nine Conference football game at Carman-Ainsworth Junior High, but the Cardinals never gave the ball back, running out the clock with a nineplay, 54-yard drive. The Cavs had no timeouts left and were powerless to stop the ticking clock.

“We didn’t get the ball back,” said Cavs coach Nate Williams. “We had a couple of earlier drives that we didn’t do anything with, and after we scored, they got the ball and converted a fourth down.”

The loss dropped the Cavs to 1-4 overall and 1-2 in the league. They had scored twice in the last six minutes to beat Powers Catholic 19-14 for their first victory the previous week.

Carman took the early lead in this game as Connor Storm kicked a 20- yard field goal with 4:47 left in the first quarter.

The Cavaliers upped the margin to 9- 0 when Shane Barron broke loose for a 76-yard touchdown run on the first play of the second quarter. The pointafter kick failed.

The Cardinals then took a 10-9 lead with 3:37 left in the third quarter when Brandon Cooper scored from the 3-yard line and Dolloff kicked the extra point. Davison made it 18-9 on the first play of the fourth quarter as Cooper scored on another 3-yard run, then ran in the two-point conversion.

As they have done in all five games so far, the Cavaliers kept fighting and scored on Allen Overton’s 26-yard touchdown pass to Nick Hill with 4:56 left in the game. Storm’s extra point made it 18-16, and his earlier field goal gave the Cavs hope that they could get him position for a game-winning kick.

But the Cardinals steadily ground out yardage and time, never allowing Carman a final chance at victory.

“I believe my guys felt they could win, but it’s a game of inches,” said Williams. “We’re continuing to get better. I’ve seen growth in my guys and we’re always fighting to the end. We’ve just got to keep improving and eventually we’ll put it all together.”

The Cavs outgained Davison 251- 212 in total yardage. Overton hit 6- of-10 passes for 117 yards, and Barron rushed 12 times for 98 yards. Gerald Holmes rushed for 30 yards on 12 carries. Hill caught two passes for 55 yards, Robert Young had a 46- yard catch and Cortney Weatherspoon made two receptions for 22 yards.

Barron and Chris Thompson were in on 10 tackles each to lead the defense. Chad Coleman had eight.

Davison beat Carman for the seventh straight time and 10th in the last 11 games. The good news is, the Cavs don’t have to wait a year to snap that string. The teams meet again at Davison on Oct. 15.

“Any time you lose to a team, you can’t wait to play them again, especially after close games like this,” Williams said. “We have a history of close games, with me and (Davison coach Jake) Emmendorfer, even when we were in the other league.”