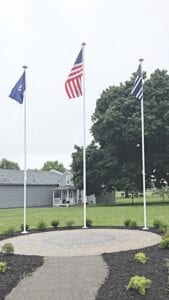 FLINT — Three flagpoles and a circle of bricks mark the site where a new memorial for fallen police officers will stand near downtown Flint.

This summer, work began on the Genesee County Law Enforcement Memorial, which is located on the corner of N. Grand Traverse Street and W. Second Avenue near Atwood Stadium. Upon completion, the memorial will honor 21 local police officers and eight K-9 officers who have been killed in the line of duty, while drawing awareness to the everyday sacrifices made by current law enforcement.

Gary Hartley, a retired Flint police officer and key organizer of the memorial project, said that the names of fallen officers will be engraved in granite on a 15-foot long stone wall, along with their department and the dates when they were killed.

“As people drive through downtown Flint, they’ll get to see the memorial and know that there were good police officers from our county who need to be honored,” he said. “My dream is for residents to have the best law enforcement memorial in the Midwest and something they can be proud of.” 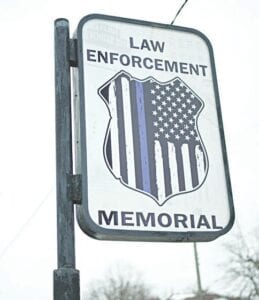 Hartley said that his mission to build a memorial was fueled in 1999 when he attended the funeral of his former patrol partner Les Keely, a Flint police officer who was killed in the line of duty.

“I though to myself, ‘This isn’t right: Here’s a guy that goes to work, gets shot and never gets to see his family again,’” Hartley said. “The people of Genesee County need to know that there are police officers who go to work and never get to go home.”

Eventually, Hartley and his business partner decided that a vacant tract of property they own along N. Grand Traverse Street in Flint would make a great spot for a memorial.

Adam Hartley, Gary’s son, has also helped his father by recruiting students from the non-profit Gear Up Academy in Flint to help with maintenance of the site. Adam, who founded the academy and its GearUp2Lead program, will be pairing students with police officers when they come to maintain the memorial—in an effort to connect the groups and build relationships between youth and police.

In addition to a wall, Gary Hartley said that the names of past and current local officers will be engraved on brick pathways around the site. Residents can contribute to the pathway by purchasing a brick in honor of an officer.

Local boy scout Connor O’Neill (Troop #111 in Linden) will also be constructing a gazebo on-site as part of his Eagle Scout service project.

When the memorial is complete, the Hartleys plan to donate it to the Fraternal Order of Police Arrowhead Lodge 126, which will maintain the site for decades to come.

In total, the cost for the memorial will be around $50,000, including construction of the memorial site, flag poles, granite wall, bronze plaques, bricks, fencing, landscaping, concrete foundation and handicap accessible sidewalks. All expenses will be covered by donations.