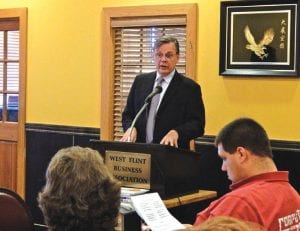 FLINT TWP. — Gossiping, complaining, whining, criticizing and blaming are some negative adult behaviors too often found in the workplace and life coach Bill Diedrich has some advice for you. Grow up.

“The average 40-year-old is a 12-year-old with 28 years of experience,” Diedrich said in his talk last week to the West Flint Business Association.

“Because we are still walking around worried about what people think of us, we are gossiping, blaming and complaining, We are playing that same role we played in junior high school and yet we are in these adult bodies,” Diedrich said.

Owner of Transformative Leadership Systems based in East Lansing, he has written a book on the subject called “Adults at Work: How Individuals and Organizations Can Grow Up.” He also conducts a workshop based on the book called “For Adults Only: Creating a Workplace Where Everyone Functions as an Adult,” It is an interactive workshop where he helps people develop their emotional intelligence and increase their ability to influence others.

Diedrich said he will be conducting an Adults Only workshop in Flint on Nov. 1 at a location yet to be determined. More details can be found online at www.noblaming.com under workshops.

Diedrich did a condensed version of the workshop in his presentation to the WFBA. He explained the differences between typical adverse behaviors in the workplace such as blaming, criticizing and every man for himself compared to behaviors in a “adult” organization which include accountability, teamwork and sharing a common vision.

Diedrich also gave insight on the difference between a childish person who wants to be the “center of attention” and an adult one who is the “center of influence.” Either one impacts the group a a whole.

“If we enter our organizations and we act and live as centers of influence, then we start looking at ourselves in terms of what effect we are having on other people,” Diedrich said.

The problem is that most adults still function as centers of attention, he said, and that is what he is out to change with his books and workshops.

“If you want to have a strong adult organization where people talk to each other and work in partnership, you have to be the influence to make that happen. It begins with you,” Diedrich said in his closing comments.

He is also author of a second book called “Beyond Blaming: Unleashing Power and Passion in People and Organizations.”