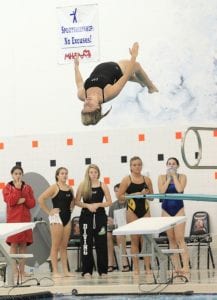 FLINT TOWNSHIP — The landscape of high school athletics in the Flint area has been constantly changing over the past few years, and with the changes implemented for this coming fall, a few new co-ops had to be created.

With Lapeer East and Lapeer West combining to become the Lapeer Lightning in the fall, a major vacancy was left within the Flint Metro League after Lapeer High was forced out of the Metro because of its size. Flushing then made the jump from the Saginaw Valley League-South to the Metro after just two seasons in the SVL.

Lapeer will essentially take Flushing’s place in the SVL, however, Flushing had co-ops with Carman- Ainsworth in both boys’ and girls’ swimming and hockey. To compete for league titles, you must be in the same conference as your co-op schools, which severed the ties between Flushing and Carman-Ainsworth. Co-ops must exist for two years, and possibly longer, pending agreement from each school and approval by the Michigan High School Athletic Association.

“We were co-oping with Flushing for a number of years,” said Carman-Ainsworth athletic director Bob Root. “Flushing joined the Metro League so league rules will not allow them to co-op anymore. We only had three CA girls’ swimmers returning and only five boys’ swimmers returning.

“We do not have near enough to be called a team. We tried to co-op with Powers and Davison, but were turned down. For our few swimmers to have a team to swim on if they desire we co-opted with Southwestern. They are the host school because they have a few more swimmers and an experienced coach. They also did not want to join if we were the host school.”

Part of that, at least for the moment, has already been resolved. Flushing has elected to co-op its swimming programs with Swartz Creek, while Carman-Ainsworth will join forces with Flint Southwestern Academy. The hockey co-ops are yet to be determined.

“Part of the league stipulations is that if you want to compete for a league championship you need to co-op with schools in the conference,” said Flushing athletic director Paul Breiger following Flushing’s acceptance into the Metro.

Merging the swim and dive teams with Swartz Creek was a good decision, not only because they are a fellow Metro member, but because the Dragons are one of the few teams in the area to have their own pool.

“We’re very excited,” continued Breiger. “Flushing has had a great history of competing with the Metro schools in non-league competition. I go to the Metro first for non-league contests because of the close proximity and competitiveness. We’re just changing the makeup to where now we can compete for a conference title when we face the Metro schools.”