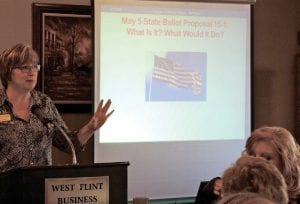 Stressing that the LWV is nonpartisan and does not take a stand on issues, Hoff’s summarized positions taken by panelists at the public forum and presented highlights of a comprehensive voter’s guide the LWV is providing on its web site at www.lwvflintarea.org/files/Proposal_ 15-1_ Slides.pdf.

A video link to the pubic forum also is available on the LWV web site.

The PowerPoint presentation provides a legislative history, ballot wording, revenues and expenditures from the proposal, supporters and opponents views and other voter information for the May 5 election..

“Nobody likes it,’’ Hoff said of the multi-faceted proposal that would raise the state sales tax to seven cents and bring increases in fuel and vehicle registration costs among 10 bills tied to it. Those bills are subject to future changes by the legislature without voter consent but the constitutional amendment to raise the sales tax requires voter approval.

If Proposal A passes, it is projected to generate an estimated $2.145 billion in revenues including about $1.6 billion in sales tax by 2017-2018; $1.3 billion in motor fuel revenues, $62 million from vehicle license fee increases, $39.8 million from heavy truck annual fees; and $600,000 from a surtax on hybrid and electric vehicles.

Anticipated expenditures totaling $2.145 billion, if the proposal passes, would include about $1.255 billion in new funding for road agencies but Hoff also noted that road revenues for the first two years would be used to pay down existing long-term road repair debt.

The proposal’s passage also would restore the Earned Income Tax Credit to 2011 levels (20 percent) to help offset the tax increase burden for low to moderate income families – an average credit of about $446 compared to the current average of $138.

One percent of the sales tax increase would go to the School Aid Fund to replace about $752 million that currently comes from fuel tax sales.

The proposal also includes a $20 million increase in the Michigan Conservation and Recreation Improvement Account that can be used for operation, maintenance and development of recreation trails, inland lake cleanups and restoration of lands damaged by off-road vehicles.

Impact of the sales tax increase on each person depends on how much you buy. An example given is that a television purchased today for $200 would include $12 in sales tax. That would rise to $14 in sales tax, if Proposal 1 passes.

The LWV guide includes detailed information about how much each county would receive in revenue sharing and for roads.

In a nutshell, “A Yes vote wlll amend the Michigan Constitution to raise the Sales Tax, to exempt motor fuel from sales and use tax, and to stop higher education inclusion in the School Aid Fund. It will activate 10 other laws which provide funding for roads and other purposes,’’ according to the LWV guide.

On the flip side, “A No vote wlll stop enactment of the Constitutional Amendment, leaving the Sales Tax at 6 percent and applied to motor fuel and will allow universities to be covered by the School Aid Fund. It will stop activation of the 10 laws tied to the package which provided funding to roads and other purposes.’’

Hoff said there is no viable Plan B in place, should voters not approve Proposal 1. Various alterative plans have been discussed but none are close to gaining legislative approval. In 2014, the Michigan Senate and House of Representatives passed separate bills for road funding, according to the LWV guide. The senate bill did not pass the house and the house bill did not pass the senate.

Hoff said one reservation she’s heard from voters, who are generally in favor of Proposal 1, is that they do not trust legislators to do what they say they will do with the funding.