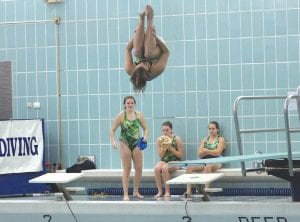 MIDLAND — While head coach Megan Kennedy is all too familiar with the numerous highs and lows the Carman-Ainsworth/Flushing varsity girls’ swim and dive team has experienced during its first season in the Saginaw Valley Association this year, at this point, those trials and tribulations are best used as the foundation for a solid postseason performance.

Serving as the Lady Cavs final chance to fine tune all they do was the preliminary round of their league meet at Midland-Dow last Thursday, resulting in a sixth-place performance with 178 points. With the top 24 squads in each event qualifying for the finals last Saturday, Jennifer Messina had Carman-Ainsworth’s best individual showing by coming in third in the diving with a score of 270.75, Taylor Wheaton was sixth with 252.8 points and taking seventh with 240.75 was Kassidy Lord. In the 50 free, Emily Stemczynski was fourth in 25.84.

Also placing fourth for the Lady Cavs in the 200 free relay in 1:50.14 was Selena Adams, McKenzie Bartllett, Stemczynski and Allia Howard and finishing

The Lady Cavs will start their Michigan High School Athletic Association championship tournament run on Nov. 13 at Macomb-L’Anse Creuse North diving regional No. 2-1 and on Nov. 16 the div. 1 swim finals will take place at Holland.