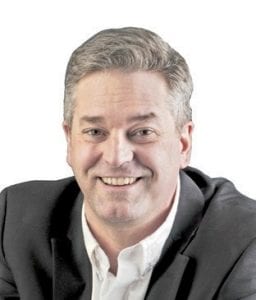 I had the following conversation with my son Henry, the teenager, in the car the other day.

Him (mumbling, half-asleep against the backseat door): “Er-rahg.”

Finally, I turned to my wife, the lovely yet formidable Marcia, and said, “You getting any of this?”

“Of course,” she said. “He said school was fine but he’s tired. And hungry. And he wants you to stop at Qdoba and get him nachos.”

“Sure. I speak caveman.”

Ah, caveman. I should have recognized it. First son Sam spoke caveman. Between the ages of 15 and 18, I never understood a word he said. Then, all of sudden, when he turned 18 and graduated high school, as if on cue, he stopped and went back to speaking English.

A translator? Lightbulb moment! Of course that’s what I need. That’s what every father of a teenage boy needs — someone who can turn “trzzzilflrps” into “Oh, I forgot to tell you, I realize it’s six in the morning but I need a new graphing calculator for my quantum trigonometry bio-engineering final in first hour.” (He actually did this the other day.)

Or “drrrrrr-fffff-blrrrrdim” into “Henry hungry. Feed Henry.” Or “ugh” — the most commonly used word in caveman — into “Gawd, I can’t believe what an utter tool you are, dad. Can I borrow the car now?”

A translator would be incredibly useful. I would pay for that. Millions of dads would. Unfortunately, there’s no business that hires out caveman translators, far as I know. Nor has Rosetta Stone come out with learning language software for caveman, which is odd. What’s more useful in the real world — learning teenage caveman or Italian? C’mon. Not even close.

I suppose I could hire another teenage boy to translate when Marcia’s not around. But you know how that goes — the second you need him he’ll be at soccer practice or something.

What I need is an app — something I can have on my cell phone — like Siri — that I can hold up to Henry’s face that will tell me what he just mumbled.

“He said he wishes you’d stop holding your phone near his face.”

But such an app does not exist. So I will have to create one.

Here is my plan:

2) Go on “Shark Tank,” and get a zillion dollars in funding from Mark Cuban, who has a 6-year-old son, meaning he’ll need this in about eight years.

4) Become rich and buy one of the lesser Hawaiian Islands.

I asked Henry what he thinks of the idea. He said, and I quote, “Brrblmmgaltrrfoom.”

Which I’m pretty sure means, “Love it! I’m so lucky to have you as a dad!”