Legacy Officials program looks to mentor next generation of referees 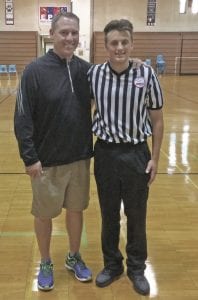 HARTLAND – Michigan, not unlike most other states across the nation, is struggling with a shortage of officials for junior high and high school sports. Steve Tannar, the Kensington Lakes Activities Association assigner says locally that Michigan High School Athletic Association registered officials are down by one third.

Looking to stem the tide, the MHSAA is reaching out to high school juniors and seniors through its Legacy Officials Program.

Jason Caine, a Grand Blanc High senior is working with his veteran partner, Shawn Waterman. Caine said he came across the program through an online application and “just wanted to give it a try.”

“I attended a clinic at Goodrich High, just the basics, and it just took off after that,” said Caine. “After the clinic I attended Rules School and the Genesee County Officials Association (GCOA). Through that, I got partnered with Shawn Waterman (a veteran MHSAA official). They mentor us and show us the basics.”

“I’m a DECA Officer at Grand Blanc,” explained Caine. “It’s a business club that presents their businesses to potential investors. Officiating is a side hobby that I want to pursue. Next year I plan on attending college and with officiating, I can take that with me wherever I go.”

Tannar said the ultimate goal of the Legacy program is to get the word out to recruit more teens like Caine.

“The main reason we are looking to grow our officials program is because we have such an officiating shortage all over the country,” said Tannar. “Not many of us are under the age of 40. The average age of our officials is mid to upper 50s. If we don’t recruit and get them working now we’re going to be faced with a shortage of officials.”

“It really began when they switched girls’ basketball (to winter) and everyone tries to play triple headers on Tuesday and Friday,” explained Tannar. “I need 42 officials in one night to fill the six schools I assign for the KLAA.”

Tannar noted that in 2012 in the GCOA they qualified 125 officials to work in MHSAA state tournaments. This year that number dropped to 84.

“Mentoring the rookie officials such as Caine is a big responsibility,” said Morley, who is one of three officiating trainers in the area. He’s been officiating in the Saginaw Valley League, Flint Metro League, Genesee Area Conference and KLAA.

“This year we were in an ad for the MHSAA and Jason was one that responded. He was looking for something other than working at McDonald’s. I told him the MHSAA has a program in place to train officials,” said Morley, who found his own path to the MHSAA officials program as an adult.

Morley also spoke to the number of officials needed.

“We figured for the Saginaw Valley plus the Thumb area and into where Steve is (KLAA), somewhere between 300 and 400 officials are needed on a given Tuesday or Friday, Morley said. Officiating isn’t easy, as it’s about more than just calling the games, noted Tannar. quitting their players,” for the the state the over

“We our first officials athletic society reverses itself, we face that challenge.”

“So much of officiating is handling people, managing emotions. If we can keep getting people of all ages interested in our officiating program we can continue to put quality officials at all levels of games; youth sports, junior high through high school and into the college games,” Uyl said.

The fans were one of Caine’s first concerns.

“It was a little nervy at first, but when I got up there, Shawn was a great partner and assured me everything was ok no matter what the outcome,” said Caine. “My background at the clinics and Rules School gave me the confidence.”

Morley explained the importance of teaming up rookies with veterans.

“That’s why this training is so important. If Jason and these others didn’t have us to learn from, lean on, fans can be brutal. Part of our training is how to combat or ignore the angry fans and block that out and do what we need to do in these games. Our job is protect our rookies in their first couple of years to help everyone handle the heat of the moment. We can’t lose someone because of the ugliness that often goes on around us,” said Morley.

The money isn’t bad either. Morely and Uly said that refs can pick up anywhere from $35 to $65 on any given night.

“Many don’t realize how good the money is in officiating,” said Uyl. “After school jobs are $9-10 dollars an hour. An officiating game they can make $35 in one game.

Tannar said the plan is to turn up the recruiting another couple of notches into the next year.

“Next year we want to get into the schools and do a presentation to an all-level program at every school. If I can get one or two kids that gets us 40 new officials.”

Uyl is grandfathering in any Legacy Official kids for free, saving them money on the typical registration fees.

More clinics are planned for the Legacy Officials program in the spring and fall of 2017.