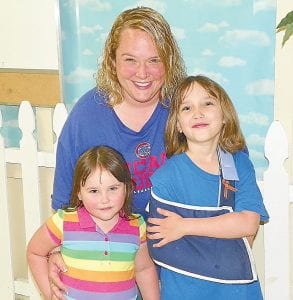 Nicole Waite and her daughters Chelsea, 4 and Tayler, 7, a student a Woodland Elementary where Nicole is president of the Parents Teacher Council and volunteers a lot of her time.

FLINT TWP. — David and Nicole Waite were the type of parents always at their child’s school, volunteering to help out.

Their oldest daughter Tayler, 7, is a second grader at Woodland Elementary and their youngest daughter Chelsea, 4, will be going there once she’s past pre-K in Swartz Creek next year.

David started helping out at the school from the time Tayler started in kindergarten and then on to first grade, Nicole Waite said of her family-oriented husband.

“We like to say we are a family here,’’ said Stephanie Dooley, a first-grade teacher at Woodland. “Last year I had to move classrooms and he (David) was the first one who said don’t worry about it, I will help you.’’

Woodland has practically become a second home to Nicole Waite who have served as the president of the Parent/Teacher Council for the past year and a half. The PTC is a small group of parents who organize programs for students throughout the year. They organize school events such as the annual picnic, trick or treating in the hallways, staff lunches, open houses and Santa’s workshop. They’re also responsible for the fall and spring fund-raisers.

But on June 9, the Woodland staff is organizing a fundraiser for the Waites.

David Waite died May 19 at age 37, after a yearlong struggle with kidney cancer. Nicole needs help paying his funeral expenses and unknown medical bills yet to come in.

Her Woodland family is stepping in to help her.

“We know what they have been going though,’’ said Dooley, one of the fundraisers chief organizers. “We know how much she does for us.’’

On a day coincidentally that would have been the Waites’ 10th wedding anniversary, from 5-8 p.m. at BD’s Mongolian Grill on Miller Road, several Woodland staff members will be serving as guest grillers during the fundraiser. They’re also planning to have a 50-50 drawing.

Dooley said the family needs to raise at least $1000 just to pay off the funeral bill.

Tickets are $20 in advance, a discount off what it costs at the door.

Dooley said she’s hoping at least 100 people will show up. Flyers are being distributed to buildings throughout the Carman-Ainsworth school district and elsewhere.

From June 2010 when her husband was diagnosed until December when his disability benefits finally kicked in, the family had very little income, said Nicole.

Ironically, the fundraiser is the kind thing that David Waite would have done for another family, Dooley said.

“He always worked really hard to make sure his family didn’t need help. He took care of them,’’ she said. “He would never have asked for help but he would have taken care of anybody’s family who needed help.”

“He was just an amazing family man. As young as he was, you don’t often see that.”

Both women teared up while singing David Waite’s praises.

Nicole described David as an amazing husband and father. He had a weird sense of humor and could make people laugh. He also was a lifelong Chicago Cubs fan.

They met at a Flint Generals Hockey game when Nicole was 18 and David, 22. Mutual friends introduced them and they hit it off, marrying five years later.

In February, a doctor in Ann Arbor gave him a month to live. But another doctor in Detroit refused to put a time limit on his life. She told him she would fight with him as long as he could fight, Nicole said. He was on a couple of different chemotherapy treatments and came home to his family on the Monday before he died.

“The last few days he did have a hard time remembering things,” Nicole said. “I told him it was okay for him to let go. We would be all right,’’ she said.

Waite said she’s going to ride out the summer, taking of her daughters. The kids are taking it one day at a time, she said. David’s mother is staying with them to help out.

Dooley’s also hoping someone will offer her friend a good job that pays what she needs to meet her family’s expenses beyond covering David’s medical and funeral costs.

Nicole said she’s recently taken a tutoring test and would enjoy doing that. “I like to be in the classroom,’’ she said “I like to see what my kids are doing.’’

Anyone interested in purchasing tickets to the fundraiser or making a donation to the Waite family, can contact Marie Cox, Woodland principal, at 810-591- 7500 during school hours.