Let me tell you about back in my day! 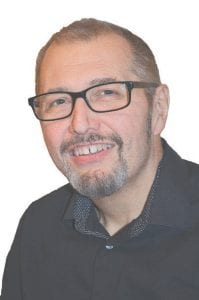 “G randpa, tell us a story!” says one, young Gould grandchild. Another one chimes in, “Yes, grandpa! Tell us about how things were when you were a kid!”

Sitting in my rocker I stop for a minute and look around at the grandchildren. It was amazing! They had all put down their virtual reality devices and were asking me, dear old granddad, to share a story.

“A story, you say?” I ask while wiping the lens of my glasses with a cloth. “You want to hear the story about what life was like back when I was your age.”

“Yeah!” the kids proclaimed in unison.

Putting my glasses back on, I gather the little ones around and begin. “Yep, back in my day we didn’t have cell phones. We had one phone, a big black one, with a dial and it was attached to the wall by a wire!”

“We did. But sometimes you only got three channels! And if the picture was fuzzy, you might want to put rabbit ears on top!” I tell them.

“Rabbit ears?” all of the grandkids gasped in unison, looks of shock and dismay on their little faces.

“No sillies!” I cackle. “Not real rabbit ears!”

Another of the grandchildren raises a hand, “Did you download music from the Internet?”

“Ha!” I balk at the notion, running my hand through my almost non-existent white hair. “We had music on vinyl records. We also had eight-track players, cassette tapes and then there were CDs.”

My explanation is met with frowning faces. I wave a liver-spotted hand at the urchins, “Too hard to explain.”

“Grandpa,” one of the kids says. “Is it true you used to have to leave the house to get groceries?”

“We shopped for everything at stores when I was a youngster,” I tell them. “You bought food at a grocery store. And to go shopping for clothes, we’d drive to the mall.”

“A mall was where there were a bunch of little stores all under one roof and you would go there and spend the whole day shopping,” I tell them, their eyes staring back at me in wonderment. “When we were teenagers, we would hang out at the mall with friends — and sometimes we’d check out girls!”

That statement is followed by a collective “Ewwww!”

“You didn’t hang out in chat rooms? You didn’t Skype with your friends?” a bewildered child asked.

“Nope,” I reply. “We socialized. You know, talked to each other, went to the movies, went on dates!”

“Children. It is time for grandpa to return to the retirement home,” the monotone female voice announced. “Say goodbye.”

“Bye grandpa!” the grandkids wave as the autonomous van backs up to the doorway. The door slides open and the chair sprouts wheels that carry old grandpa out and into the back of the awaiting van.

“Bye kids!” I call to them as I’m placed in the back of the van, but by now, the little ones are all back on their devices and no one notices as the doors close and the van carries grandpa back to the retirement home.

Checking the time, I sit back to enjoy the ride home. With an afterthought about the talk with the grandchildren, I say fondly: “Yep, those were the good old days.”