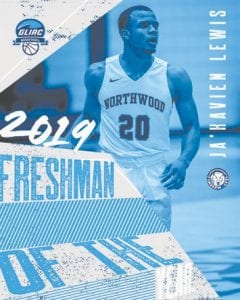 FLINT – Northwood University point guard Ja’Kavien Lewis, 2018 graduate of Carman-Ainsworth, was named GLIAC men’s basketball Freshman of the Year on March 8. He was also awarded to the All-GLIAC second team.

Lewis began the season in a shooting slump, starting his college career shooting 9-for-39 from the field, before shining as a distributor. Lewis’ 178 assists led the entire conference and were the second-most ever on Northwood’s all-time single season list. He recorded at least eight assists in 11 games and finished the season averaging 12.3 points, 6.1 assists and 4.1 rebounds.

The Flint native is just the second Northwood player to win GLIAC Freshman of the Year. Aaron Simpson first won the award in 2006.

The Timberwolves finished 9-11 in conference play and 12-17 overall, but Northwood earned its first trip to the GLIAC tournament since 2015. Lewis and the Timberwolves nearly upset top-seeded Davenport in the first round, ultimately losing 85-84.

Last season, Lewis was named to the AP’s First Team All-State team and led Carman- Ainsworth to the Class A quarterfinals, where the Cavaliers lost to eventual state-champion Clarkston 52-31.