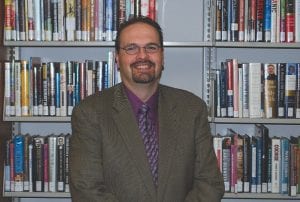 David Conklin has been appointed the new director of the Genesee District Library system. Conklin was previously the director of the Shelby Township Library for the past five years.

“I really, really liked the people and enjoyed working at Shelby but I couldn’t pass up this opportunity,” said Conklin.

Conklin is well-qualified for this position. He’s a Library of Michigan leadership academy graduate and has a master’s degree in library and information sciences.

Conklin worked for 19 years at the Oakland County library, several more at the Cromaine District Library, and had a brief stint at the Independence Township library.

He said he will hopefully leverage his education, experience, and training during his time in the position of director.

As director, Conklin will be managing the 19 branch GDL system, consisting of about 120 employees, he said.

“Bringing all those people together working in a unified manner to give consistent quality service is a bit of a challenge,” said Conklin.

Conklin said he also hopes he can help challenge the traditional idea members of the community have about what a library is.

“We’re definitely more than just a warehouse for books,” he said.

He wants people to know the library is a place to meet neighbors and people with common interests, and a place to get children to read. The libraries also work with electronic media, not just paper-and-ink books.

Conklin said the GDL has been very helpful and receptive in acclimating him to the new position.

He said that this position will be a learning experience as he discovers how things are done, and how to apply himself in leveraging the strengths of the GDL and working with the weaknesses.

“It’s a bit of a challenge creating my own identity and becoming part of that library,” said Conklin.

In any case, Conklin said he is looking forward to working in his new position.

“I’m excited and honored to be here,” he said.