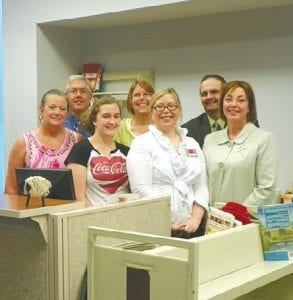 FLINT TWP. — After being closed four weeks for renovations, the Genesee District Library Flint Township branch reopened May 20 and hosted a grand reopening event last week to show off its new look.

Work done included removing doors separating the main library from the reading room to open up the space. The front desk and public computer areas were relocated and Friends of the Library chipped in with new countertops for the computer stations and also reupholstering for some lounge chairs.

Patrons have been calling for weeks wanting to know when the library would reopen, Birmingham said. Besides borrowing books, patrons come in to use the computers and FAX machine.

In April alone, before the doors closed on April 22, the library provided 11,915 units of service to about 3,000 people who visited the library, according to Darwin McGuire, technical services manager.

Birmingham added that the doors have reopened just in time for GDL’s popular summer reading program to encourage young people to read while school is out.

“Dig Into Reading” began June 1 with a session called Worm Motels, teaching kids to design and build a home for a pet worm.

The next session, Trickster Tales, featuring interactive stories and music from around the world, will be held at 11 a.m. June 26. Classroom Critters at 1 p.m. July 23 and Tie-Dye and Ice cream at 1 p.m. Aug. 3 will conclude the summer program.

The bulk of the renovation work was paid for by Flint Township, which owns the building. Contractors were Sather Electrical Contracting of Clio which handled the electrical work and J.W. Morgan Construction of Swartz Creek which did the rest of the work.

“We are very pleased,” Miller said of the renovations “Please come and enjoy the new atmosphere.”

Birmingham said it’s been 20-plus years since the library had a facelift.

Nealy added that the Friends will be holding another used book sale from 9 a.m. to 3 p.m. June 21 at the pavilion adjacent to the library and senior citizens center, 2071 Graham Road.