Lieske appointed to fill vacant board of education seat 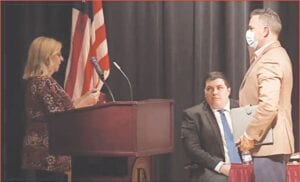 Eric Lieske is sworn in as a member of the Davison Board of Education after his appointment, Sept. 14. Photo from DTV YouTube feed

DAVISON — Eric Lieske, the former superintendent of Davison schools, was chosen from a list of 24 applicants to serve the remaining time of an open seat on the Davison Board of Education, Sept. 14.

The vote to appoint Lieske to the seat vacated last month by the resignation of board member John Hair was 5-1, with Matthew Smith being the sole vote against the former superintendent.

Besides Lieske, attorney Elizabeth Latchana and resident Sharon Wilson were also sent to the board for consideration. 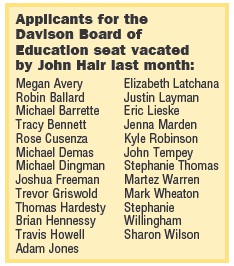 With the motion to appoint Lieske already on the table, Board President Kathleen Sudia moved to have the board vote, but Smith objected.

“So, we can’t discuss any other candidates? There’s no more discussion? The interviews just finished, and ‘boom’ you made a motion?” said Smith. “I think we need to table that motion, talk about how we feel about those three candidates as a group, and then make a motion. Jumping the gun and making a motion right after Lieske’s interview, we haven’t even gotten to talk as a collective group yet.”

Sudia told Smith “your vote is indicative of how you feel.”

Conover said she has never met anyone who loves children more and has dedicated himself completely to education than Lieske.

“That’s to all children. Whether they’re here or in another school district. And to add to this he has an incredible range of teaching experience, administrative experience and his institutional knowledge of our particular school district,” she said. “And his generational commitment to our community. We had some incredible applicants and tonight we had some great interviews, but Mr. Lieske is absolutely in a league of his own and he can contribute an enormous amount to our district and our board.”

Stephanie Thomas, a candidate for school board in the Nov. 3 election and one of the 24 applicants for the open position, raised her own concerns about Lieske’s appointment in an email to the board.

In that message, Thomas said she is concerned about a possible conflict of interest with Lieske because he left the Davison school district to become the chief executive officer of the Flint Cultural Center Academy two years ago, which she called a competing charter school with Davison.

Thomas said she feared Lieske would seek to attract staff and students to the academy while serving as a board member in Davison.

“To set the record straight, I have no ill-feeling towards Mr. Lieske. I have always been impressed with his passion to make Davison a school district to be proud of. I am thankful for the years of dedication and service he has shown our district and out of all the applicants he does have the most impressive experience and would serve our board and district well,” said Thomas in her email. “Mr. Lieske left our district to serve the Flint community when they started their charter school – Flint Cultural Center Academy. However, I feel this is a conflict of interest for Mr. Lieske to serve on the school board. The charter school of which Mr. Lieske is CEO accepts a lot of students and a lot of them come from the Davison school district.

“Some Davison school district employees also left to work at this charter school…this is a conflict of interest that should not be ignored because of the qualifications of the candidate.”

Thomas went on to say Davison schools need the best people to serve on the school board, people that care about the schools having the best staff. Thomas also said the community wants people who are willing to accept change, not people who will sit on the board for recognition and vote with the majority due to peer pressure.

Superintendent Kevin Brown, who was assistant superintendent under Lieske, spoke in defense of Lieske and the board.

“We need people that care about our children to sit on the board, people who want to retain the best staff and make us a destination school district. The statement seems to imply that current members of the board don’t really care about Davison children,” he said. “I want to take issue with that, I take offense to that.”

Brown said the district’s attorney saw no conflict of interest with Lieske serving on the board and he added it is not unusual for the principal and CEO of a charter school to serve on the board of a public-school system.

During the interviews, Sudia asked Lieske why he was interested in serving on the school board.

He said he wanted an opportunity to give something back to the district where he not only was once a student, but where he worked as a teacher and administrator for 22 years.

“This school district and community have been very, very good to both myself and my family for many years. Growing up in Davison, having a family business on Main Street (Lieske Hardware), attending the schools, working for the school district in excess of 22 years, have all had a huge influence on me,” said Lieske. “I told you when I resigned that if I could be of any help to the district that I certainly wanted to take that opportunity and do my part to help give a little back. As a parent of a DHS student, and I have a nephew here, I’m invested here.”

Smith asked Lieske during the interview if he thought serving on the board would present a potential conflict of interest.

Lieske clarified that two staff members he’d known for a long time had reached out to him and asked about working at the new academy. He said he worked with Brown to make their transition to the new school so it would not disrupt operations in Davison schools.

He said there are currently nine Davison students out of the 448 total at the academy. A lottery determines gets in, so his ability to “handpick or cherry-pick” students is not an option.

He added the process is very public and is done by a third party.

Board member Mark McGlashen said he was impressed all three candidates, but he said he didn’t see any potential for a conflict of interest with Lieske.

Smith said to the other applicants, including those not interviewed, he thinks they all should consider running for the school board.