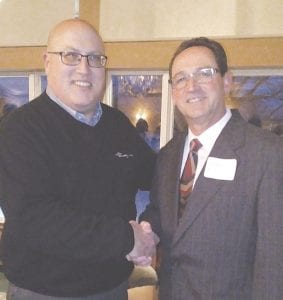 Lieutenant Jeff Neville, who was stabbed at Bishop International Airport, shakes hands with Richard Krul, who has been called Neville’s angel in the incident.

“I can tell you there’s no such thing as a routine in police work,” he said.

“That’s the day that changed my life forever, in both bad and good ways,” Neville said.

“He told the FBI that his goal that day was to kill me, take my gun, use my gun against other law enforcement and then hopefully be martyred on Ramadan,” Neville said.

He said his attacker had failed at everything he sought to accomplish. He also said the reason he was successfully saved was because Richard Krul, a maintenance repairman who pulled the assailant off so Neville could turn around and get engaged to the assailant, acted instantly, without hesitation and without any regard for his own safety.

Another reason, he said, was because Neville didn’t panic and he stayed engaged throughout the event. Also, he said his chief and the fire chief helped by responding effectively as quickly as possible and restraining the attacker.

Neville recalled not knowing all the blood around him was his, grabbing a knife while Krul had the attacker on the ground, jumping on the assailant’s wrist and being so bloody he couldn’t get his handcuffs out.

He said he arrived to Hurley Medical Center in record time after the attack.

“The treatment I received was stellar,” said Neville.

Neville said Hurley is a jewel in the community.

He said his son was born prematurely and the mother had a high-risk pregnancy because she had chickenpox. His son supposed to be delivered at another hospital, but had to be rushed to Hurley, and will turn 21 this year.

Neville said people ask him when he’s going back to work, and he doesn’t know when the time will be right. He said on TV shows when a man gets stabbed his life goes back to normal, and that was not reality. Neville said life was more than work, and people should make the most of every day.

Neville said when he was a young deputy sheriff, the Hundred Club gave he and his colleagues bullet proof vests, which they didn’t have. Chief Chris Miller, director of public safety for Bishop International Airport Authority, was presented with a check for $5,000 from the Hundred Club during the meeting. Neville said the assailant was not able to get through his bulletproof vest and the Hundred Club gives away a lot of these vests.

“I just want to thank the Hundred Club for all they give us,” Neville said.