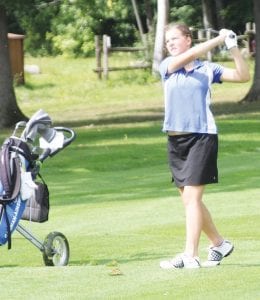 LAPEER – Lapeer High played its first competition as a Div. 1 girls’ golf team Friday, and the Lightning fit in well.

Lapeer finished fifth in the inaugural Lapeer Lightning Summer Tuneup, shooting 368 at Lapeer Country Club, and even the Lightning B team finished high, carding 402 to place 10th in the 23-team field.

Lake Orion, the 10th-place team in the state last year, won the title with a 324, Rochester was second with a 341, defending champion South Lyon was third with a 345 and Port Huron Northern was fourth with a 366. All of those teams will be back at the country club Oct. 8 for a Div. 1 regional tournament, except South Lyon, which is a Div. 2 school and placed fourth in that state final last year.

Caycee Turczyn shot 85 to tie for sixth place individually and lead the Lightning. Abby Kanasty tied for 20th with a 93, and Emily Alexander and Brooke Gibbons shared 25th with 95s.

“The girls played well,” said Lapeer coach Steve Carlson. “We’ll shoot some better scores than what we shot today, but I think we did pretty good for the first time out.”

The B team was a pleasant surprise with its 10th-place showing, and Baylee Thompson put herself in line for a varsity spot with an 89. Allison B. Johnson shot 99, Ellie Burel carded 104 and Allison M. Johnson shot 111.

Veronica Hoque of Rochester was medalist with a 1-under-par 71, two strokes better than Lake Orion’s Moyea Russell. No other golfer in the field broke 80.

Imlay City was the only other Lapeer County team in the field, and the Spartans had only three golfers, with some of the others at band camp. Mary Miller shot 111, Skylar Hintz 117 and Samantha Tietz 136.

The tournament officially replaces the sevenyear old Lapeer Summer Tuneup after the merger of East and West high schools, but only in name. The event again ran smoothly under the direction of Pat Cronin and finished in less than five hours.

“I thought the tournament ran good,” said Carlson. “The main thing is the weather agreed with us. It looked like it was going to be iffy at best.

“With the big field we had, I think this is the fastest we’ve ever completed it. Pat Cronin has run it for eight years. That really is a huge benefit to have someone who knows what they’re doing to coordinate the whole thing.”