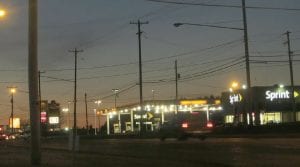 Fortunately, businesses along the township’s major roads – Miller, Linden and Corunna – are well lit because many streetlights along those routes are out and township officials want to know why Consumers Energy is slow about responding to requests to fix them.

FLINT TWP. — At the past two township board meetings, residents have come forward to complain about a large number of streetlight outages.

Kevin Stiff, a business owner and resident, said he personally drove around the township counting outages – 49 on Miller Road, 20 on Corunna Road and about 35 on Linden Road before he stopped counting.

Stiff said Consumers Energy, which is contracted by the township to take care of streetlights, needs to do a better maintenance job and the township should stipulate that in its contract.

“We are spending so much money, we could literally hire an electrical contractor to service lighting and come out ahead,” Stiff said.

Tucker said she first contacted Consumers to get their map of streetlight locations. At one point, she considered marking the light poles with paint to help Consumers identify them during the daytime.

“I thought using their maps would be the best way to handle it,” Tucker said. “Some of these lights are not in front of an address.”

Tucker said she and a code enforcement officer drove around five or six nights mapping outages. The results were sent back to Consumers which did not respond directly. Tucker said she did notice that most lights on Linden Road have been fixed.

But one still dark corner of concern is near the police station on Norko Drive.

Miller added that a light down on Charter Drive between Court and Calkins has been reported at least three times with no response. She also noted that Consumers has a form on its website where anyone can report streetlight outages.

Tucker said she would set up a follow-up meeting with Consumers representatives to try to find out when the lights will get fixed.

Trustee Frank Kasle drew applause from the audience when he suggested that Tucker include the township attorney in the meeting so that he can inform Consumers that they are in breach of the contract and will not be paid if the lights are not fixed.

In January, the board signed a one-year renewable contract with Consumers, agreeing to a billing of $34,028 for maintenance service of its 2217 lights on public streets and highways and well as private property under mutual agreement.

The township has a mixture of incandescent, mercury vapor and high pressure sodium lights.