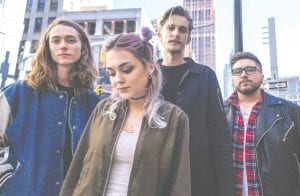 GENESEE COUNTY — Lilac Lungs, a local “indie pop” band featuring members from the Grand Blanc and Goodrich areas, are set to release their debut album Eventide on May 12.

The album release will be held the Crofoot Ballroom in Pontiac beginning at 6 p.m.

Members Emily Torres (lead vocals and keyboard), John Birrell (vocals and guitar), Matthew Jones (drums), and Terrance Elizondo (bass) officially formed in 2016. At first, Emily and John were the band’s only members, creating a self titled EP together. Jones joined the band for their first live performance, with Elizondo joining at a later date.

Despite only forming a year ago, Lilac Lungs has a loyal fan base, one that continues to grow along with the band’s success.

“We’ve always been grateful to have a strong, albeit small following since the beginning of this project,” said Birrell. “Since the start of 2017, we have seen a jump in our fan base.”

The band recently released a music video for their newest single “Uh oh.”

“We come from a variety of musical backgrounds and influences,” Birrell said. “Everthing from rock and roll to up beat 80s jams. I don’t think we have a set band that we are trying to sound like and mimic.”

According to its members, Lilac Lungs describes their sound as “indie pop,” and looks to artists like Twenty One Pilots and Michael Jackson for inspiration regarding their performances and how to conduct themselves on and off the stage.

Birrell describes their upcoming album as diverse, featuring dark and powerful tunes, to happy and upbeat songs. “We strive to create music we think sounds good and that we think our listeners would enjoy,” he said.

Torres, who first began creating and performing music as a young age, says her craft has evolved over the years.

“I believe my vision of who I am as a artist and what I want to say has grown and become very personal to me,” she said. “I no longer sing bubblegum-cutesy girl pop that’s about a crush I had when I was 14.”

Instead, Torres writes about personal struggles like anxiety and fear. “I am really drawn to emotionally driven synths and songs that make you think, even if they sometimes feel a little dark,” she said.

The band collectively agreed that their favorite performance was any early 2017 show at the Pike Room in Pontiac. “There was a part during our set that we brought everything down and performed one of our intimate songs called “Tranquil” from our EP,” Birrell said. “Emily barely had to sing any of the words because our audience knew every lyric at was singing at their top of their lungs. It was a very humbling and beautiful moment.”

Birrell credits the band’s commitment to their fans as a contributor to their success so far. “We really value feeling close to our fans and having them feel like they are such a special part of this,” he said. “We would be nowhere without their support.”

Torres also admitted that before creating Lilac Lungs, she didn’t feel like herself. “Just like anything worth doing, it takes awhile to grow into your craft. We are so grateful to have this opportunity,” she said.

Lilac Lungs will perform next at the Crofoot Ballroom in Pontiac on May 12. Tickets are $10 dollars in advance and $12. at the door. Other local groups like A Year in New York, Young Pioneer, and If Walls Could Talk will also perform.

Tickets for the event can be purchased at fusionshows.com/events/lilaclungs 05-12-17-the-crofoot-ballroom.