Linkowski in the American Idol Top 40 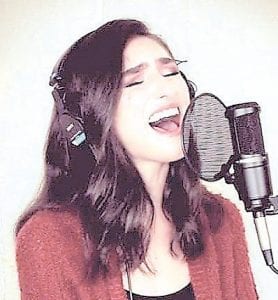 GOODRICH — Goodrich native Genavieve Linkowski has made it into the Top 40 after three weeks of competition on “American Idol.”

Linkowski made it through all three rounds during Hollywood Week and landed in the Top 40 with a heart-rending solo performance of the Shawn Mendes song, “In My Blood.” The rendition that aired Monday night made her one of the top 20 women remaining in the competition.

Judge Katy Perry’s reaction was a signal to Linkowski that she would not be getting sent home.

“I love seeing her grow in real time,” Perry said.

“I didn’t expect Katy’s reaction. I was looking at her the whole time,” Linkowski said. “I think I just gave a performance that will not send me home, and I’m really excited.”

This is Linkowski’s second shot on “American Idol.” She appeared on the show in 2018 and made it to the final round of Hollywood Week before being eliminated. But this season has been a big change since 2018. Linkowski’s sister, Corinn, died in a car accident last year, and she has shared her loss with “Idol” fans.

On Sunday night’s show, Linkowski teamed up with Travis Finlay for the duet second round, a new feature this season. The duo chose to sing the ballad, “The Prayer,” by Celine Dion and Andrea Bocelli.

“Having her not here this time is really hard,” Linkowski said. “She was my partner, especially singing. We always did it together, always. I don’t usually do duets anymore ever since my sister passed, but it would mean so much to me to get through. I never imagined having to do something like this without her. I just miss her a lot, and I just wish she could be with me right now.”

The three judges gave the duet a standing ovation before telling Linkowski and Finlay they would advance to the final round of Hollywood Week.

Upon hearing she had made it into the Top 40, Linkowski said, “This is a whole new feeling.”

The Top 40 round has been pre-recorded at Aulani Disney resort in Hawaii where the Top 40 performed in a showcase for an audience on the beach. They then learned whether they had made it as a finalist. The Hawaii shows will air March 29 and 30 at 8 p.m. on NBC.

The live shows for the finals traditionally air live, but they are being postponed during the COVID-19 outbreak.