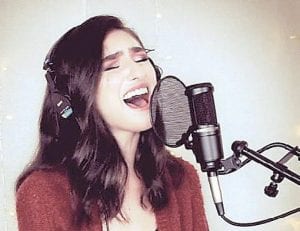 GOODRICH — Area residents will finally get the chance to see a hometown favorite perform on the ABC singing competition “American Idol.”

Genavieve Linkowski of Goodrich will appear in Sunday’s episode, airing from 8 to 10 p.m. Her publicist confirmed the date Monday.

This is the second time Linkowski, 21, has auditioned for the show. She first appeared on the program in 2018 when her performance of the Jason Mraz song “I Won’t Give Up” earned her a golden ticket to Hollywood.

Linkowski’s father, Craig Linkowski posted an announcement on Facebook Monday, saying “Crazy week ahead. Prayers for God to shine through it all!”

The singer posted a YouTube video Jan. 16 announcing that she would be returning to the show.

“It’s not something I knew I would do again, but one day I got a call, and I prayed over it,” she said. “I thought about it. I talked to my parents. I talked to a lot of people. I kind of just came to the conclusion that this is just another opportunity for God’s light to shine, for my sister’s light to shine and for me to just share my story. If I get to do that, I’m all in. If I get to point others to Jesus, then that is what I’m all about.”

Genavieve’s sister, Corinn Linkowski, died Feb. 17, 2019 after a head-on crash four days earlier in Atlas Township. The sisters performed together on their Haven Avenue YouTube channel and were being considered as a duet for NBC’s “America’s Got Talent.”

Linkowski has continued to perform around the country, including singing the National Anthem at Detroit Lions games in September 2018 and December 2019.