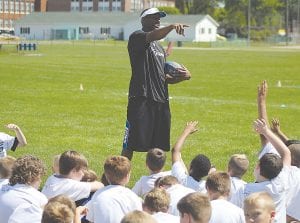 Detroit Lions’ cornerback Chris Greenwood takes questions from the youngsters as the first day of the youth camp winds down.

GRAND BLANC — The Detroit Lions’ Youth Football Camp seems to be a recurring theme on the Grand Blanc high school football practice field each summer, and it’s easy to see why. Dozens of boys and girls between ages six and 14 continue to show up for the camp, and in an enthusiastic manner, to say the least.

Each year the Lions will typically send one of their players to help instruct the kids, as well as sign a few autographs for the smiling faces that grace the field. This year’s guest of honor was Lions’ second-year cornerback Chris Greenwood, who made his appearance at Monday’s session. Greenwood, who battled injuries a year ago, played his college ball at Albion and looks to compete for a starting spot this year.

“It feels good (to give back to the kids),” said Greenwood. “I mean, it’s definitely something that I experienced when I was their age. You know, it’s something that I wanted to do for them.”

The four day camp, ranging from June 17-20 with 8:30 a.m.-noon sessions, was $169 per child and focused on several different skill sets across the Grand Blanc practice facility. At Greenwood’s station, however, the focus was on his abilities at the cornerback position.

“Today was mostly catching, you know, securing the ball,” added Greenwood. “We did a few footwork drills like backpedaling, but it was mainly catching.”

The camp focused on more that just football. In fact, the football aspect is used to help teach the kids life lessons that are applicable even after their athletic endeavors come to an end.

“(We instill) goal setting, things like that, and working hard to achieve your goals,” continued Greenwood, who also noted the great atmosphere of the camp. “I feel like it went good. They picked up on a lot of things. There’s a lot of excitement out here; a lot of energy.”

As the camp began to wind down, Greenwood spoke and began to take questions from the youngsters. One of the funnier moments of the day occurred when one boy asked Greenwood about the difficulties of covering Calvin Johnson.

“It’s one of the hardest things I’ve ever had to do in my life,” stated Greenwood. “(Johnson) is a freak.”

As far as his upcoming season with the Lions, Greenwood understands the task at hand with an optimistic view of what the coming season could be like.