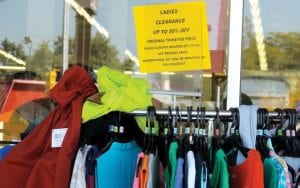 A sandwich board sign on Miller Road and sidewalk sale merchandise alert the public that a liquidation sale has begun at the long-standing Kmart store on Miller Road.

FLINT TWP. — Time to say goodbye to Blue Light specials. After 50 years of serving the community, the Kmart store at 3083 Miller Road will be closing for good in early December. Open since 1964, it is the oldest remaining Kmart store in Genesee County and the second longest operating behind the Dort Highway store, which opened in 1963 and closed last year.

Kmart is owned by Illinois-based Sears Holding Company, which announced last week that it will close five more Michigan stores including two in Genesee County. The Kmart in Burton, 1145 N. Belsay Road, opened in 1975, is also on the closing list.

A Grand Blanc store, 12730 S. Saginaw Road, closed earlier this year in mid-July, had been in business since 1978.

The two remaining Kmarts in Genesee County are its newest stores. The Fenton store at 18055 Silver Parkway opened in 1995 (replacing a 19-year-old store) and the Clio store at 4920 W. Vienna Road opened in 1999.

“Store closures are part of a series of actions we’re taking to reduce on-going expenses, adjust our asset base, and accelerate the transformation of our business model,” said Chris Braithwaite, a Kmart media spokesperson, in a press statement. “These actions will better enable us to focus our investments on serving our customers and members through integrated retail – at the store, online and in the home. Our investments in Shop Your Way (a free online shopping rewards program) and Integrated Retail enable us to migrate the shopping activity of highly engaged members who previously shopped closed stores to alternative channels. As a result, we hope to retain a portion of the sales previously associated with this store by nurturing and maintaining our relationships with the members that shopped this location,” he said.

The Miller Road store has 81 employees, most of them are part-time/hourly workers, Braithwaite said. Eligible associates will receive severance and have the opportunity to apply for open positions at area Sears or Kmart stores.

The store began its liquidation sale on September 28 and will close to the public by early December.

A longtime fixture in Michigan, the discount department store was founded in 1899 as the SS Kresge Corporation based in Detroit. It was renamed Kmart 1962 and based in Troy until 2003 when its headquarters moved to Hoffman Estates Illinois as part of a bankruptcy merger.

In 2009, Kmart closed its Owosso store, operating since 1974, and earlier this year also closed its Lapeer store that had been in business since 1976.

The 52,000 square-foot Miller Road store previously was on a closure list in 2003 during Kmart bankruptcy reorganization, but was spared in a last-minute lease renegotiation that kept it afloat until now.

On an optimistic note, the company reported progress in online and multi-channel sales. Sales to Shop Your Way members in Sears Full-line and Kmart stores increased to 73% of eligible sales, up from 71% during the second quarter last year. Online and multi-channel sales grew 18% over the prior year second quarter and 22% over the prior year first half.

A Sears store at Genesee Valley Center appears to be weathering the financial storm for now but Sears Holding has also announced the closing by early December of the Sears store at Summit Place Mall in Waterford, which has been in operation since 1971. It was the last store open at the otherwise vacant mall.