FLINT TWP. — Kids at a local daycare center went the extra mile this summer to raise funds for a friend battling leukemia.

On July 17, Little Rascals Daycare in Flint Township hosted a bike-a-thon fundraiser for Sophia Lane, a seven-year-old girl who was recently diagnosed with Acute Lymphoblastic Leukemia. Kids who attend the daycare raised money for Sophia by riding around on their bikes and scooters in the neighboring Corunna Road Baptist Church parking lot.

For every lap the kids took, Little Rascals Daycare made a donation to fund Lane’s medical treatment. Children and their families, along with various individuals, also brought donations with them.

Mary Simmington, director of Little Rascals Daycare, said that the fundraiser brought in $1,400.

“Each year, we do a bike-a-thon with the kids to raise money for a cause,” she said. “Just like always, our community showed up with incredible emotional and monetary support.” 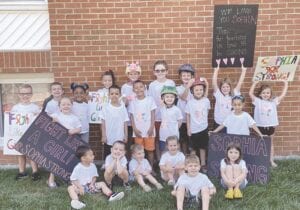 Sophia’s mom, Mallory Lane, said that her daughter was ecstatic to see her friends at the daycare center and the support they gave her.

“Sophia was in awe, seeing the signs the kids made for her and the shirts they made for ‘Sophia Strong,’” Mallory said. “We appreciate this nice gesture from Mary and the daycare center.”

Sophia, who has attended Little Rascals since she was a toddler, was diagnosed with leukemia in early June and has been undergoing chemo treatments for over a month. She’s currently in her second stage of chemo and will have to go through at least three years of treatment.

But for one summer afternoon, Sophia was able to put those concerns behind her and enjoy the company of her friends.

“She has missed a lot being in the hospital and having to stay home, especially with COVID- 19 going around,” said Mallory Lane. “She was so excited to play and to be a kid again.” 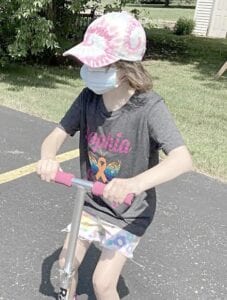