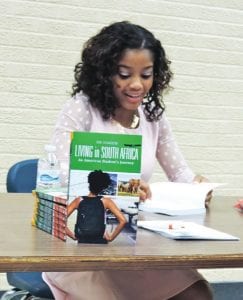 CAHS senior Rani Richardson autographs a copy of her new book at a book-signing event last week. Richardson (left) poses with her family during her book signing at the high school.

FLINT TWP. — Rani Richardson had not been born when the South African system of racial separation called Apartheid ended 20 years ago.

Now a senior at Carman- Ainsworth High School, Rani has chronicled her experiences as an African-American exchange student living in South Africa with a white host family for six months during her junior year.

Her book, “Living in South Africa: An American Student’s Journey” was featured at a book signing last Wednesday afternoon in the high school cafeteria.

Between signing copies and reading excerpts, Rani answered questions that revealed the story behind the story.

For one, the book was drafted from daily journaling using the memo pad on her cell phone. She’d send the files to her parents, Recco and Renee Richardson, who transferred them to a computer.

“When I got there, I decided to take notes because I wanted to remember it 50 years from now when I am old,’’ said Rani, who is a CAHS honor student and captain of the girl’s track team. 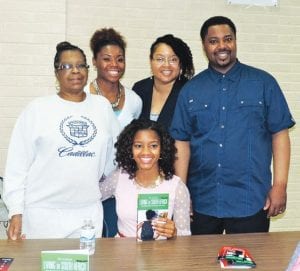 Though Rani had not planned to write a book from the outset, the 200 pages of material she wrote in diary form soon turned into book form after she returned home. She and her parents, Recco and Renee Richardson, searched around for a publisher and settled on, Tate Publishing of Oklahoma, a Christian-based, family owned business specializing in marketing unknown authors.

“They said they did not have anything like this in their portfolio ’ said Recco Richardson, who is a former member of the C-A Board of Education and also a pub- lished author. “An African-American student going over to stay with a white family (18 years) after Apartheid ended … that is what caught their interest.”

Rani said she became interested in becoming an exchange student after seeing foreign exchange students in the halls at her high school and because she wanted to get away from home. Online research led her to the program she chose. 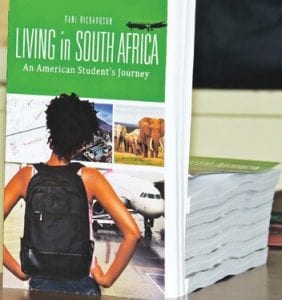 Having attended summer and academic camps since age 12 helped prepare her for living away from home, a prerequisite she recommends for others interested in becoming a foreign exchange student, but nothing prepared her for the dramatic cultural differences in food, school and language she experienced that she talks about in the book.

She recounted one anxious episode in a German airport when she learned that European cell phone charging ports did not fit her dying cell phone. After several panicky moments, she was saved by a fellow traveler who allowed her to power up her cell phone battery from a port on his laptop.

The incident was frustrating and upsetting but Rani, who prides herself on being prepared, said that after calming down she realized that American airports don’t offer charging stations for foreign phones so it makes sense that a German airport wouldn’t offer one to accommodate her.

A lively Q and A session at Rani’s book signing also revealed a final hurdle to overcome when a weeklong power outage at their home last December forced her to use public library computers to meet final deadlines for her revised manuscript.

Rani said she plans to hold at least two more book signings during the summer but she already is looking ahead to leaving home to attend college at the University of Pennsylvania where she will enter a Biological Basis of Behavior Program on a pre-medical track, with plans to become a doctor.

Rani said it feels great to be a published author at such a young age, an accomplishment that few other 17-year-olds can claim. She said she keeps in touch with her South African host family and hopes to return someday.