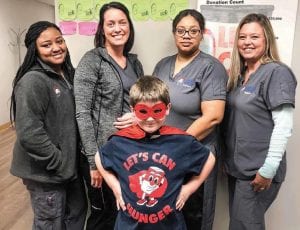 Liam Senton, 7, a first-grade student at Holly Elementary School, stands in his “Super Can Man” outfit with employees at the Vascular Institute of Michigan. Photo provided

On Tuesday, March 26, Liam received his award at the Food Bank of Eastern Michigan’s annual recognition luncheon. He was joined by his mom and dad, along with Holly Elementary School Principal Ryan Desana, and Michael Newcomb, Holly Area Schools Board of Education president.

His mother, Michelle Senton, said “Liam is a force of nature and loves making a difference in his community. His school, Holly Elementary, is a lighthouse school for the Leader in Me (www.leaderinme.org/) program. This program encourages kids to stand up in their communities and become leaders. Last year, Super Can Man’s school allowed him to present his food drive to the entire school and created a spirit week to encourage his schoolmates to donate non-perishable food to his food drive.”

This is the third year Liam will partner with his mother’s workplace, The Vascular Institute of Michigan, for the VIMcares Let’s Can Hunger Food Drive on Saturday, May 18, from 10 a.m. to 2 p.m. Liam mainly collects donations in the spring, but this is his big yearly event where he wears his mask and cape.

In the last two years, The Vascular Institute of Michigan has raised approximately $50,000 in cash and over 4,000 lbs. of non-perishable food items.

Hannah Ball is a staff writer for the Tri- County Times.