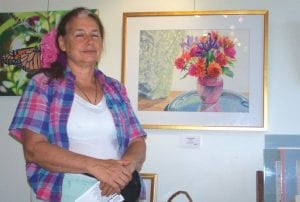 Alicia Marsland with one of her watercolor paintings.

Further, a reception will be held on Sept. 23 from 12-4 p.m. where people can meet and talk with Marsland as well as enjoy some snacks, punch and coffee.

“All original art is kind of an investment,” said Marsland. “With luck it will accrue in value.”

Some of the original paintings will be matted and framed behind glass, while others will just be matted.

“The more stuff you have on a painting, the more expensive the painting,” Marsland said.

There will also be prints available which will range in price from $25 to $80. The prints will be signed, numbered and matted.

“The signed prints are more valuable than any old print,” said Marsland.

Marsland said her favorite subject matter for her paintings is landscapes, still life and what she calls “travelscapes.”

The landscape paintings are generally renderings of her hometown in upstate New York along with some local imagery from Swartz Creek. The still life paintings are often inspired by flowers from her garden, and the “travelscapes” depict images from places she has traveled with her husband, including Alaska, Europe and the Carribbean.

Marsland, 60, started basic art training at the Roberson Memorial Center in Binghamton, New York, at the age of 10 years old. She later attended Cornell University where she earned a bachelors in human development with a minor in design.

After college, Marsland said she planned on pursuing studies in art at Syracuse University, but never went because she lacked the money to pay for the tuition.

She moved to Swartz Creek in 1984 and started taking watercolor classes at the Flint Institute of Arts in 1998. Marsland later received her masters in education from Saginaw Valley State University in 2010.

Overall, Marsland has been painting for 50 years.

“I’m a little freer now. I don’t spend hours fixing mistakes because I don’t make them as much anymore,” she said. “It’s become easier to do.”

When she was younger, Marsland started painting with oils, but switched over to watercolors. She said that she could get a watercolor painting done much quicker than an oil painting. She added that she usually finishes a watercolor in 10-12 hours.

“As a mother I needed something I could do quickly instead of slaving over it all the time,” she said.

“The market is what the market is where you are. The Flint area doesn’t have a big market,” she said. “It’s much more sensible to use watercolor.”

“Nature speaks to us with the voice of God,” she said. “It’s my way of listening to God.”

Marsland has been married to Father Gene Geromel, who is the rector at Saint Bartholomew’s Anglican Church in Swartz Creek, for 35 years.

“I probably would not be able to do any of the things I do without the full-hearted support and love of my husband,” Marsland said.

Marsland has four children and one foster son. She also has three grandchildren with a fourth grandchild on the way as well as three foster grandchildren.

The Swartz Creek Art Gallery is located at 8048 Miller Road, Suite G, in Swartz Creek. For more information about the art exhibit, call the gallery at 810-630-6076.