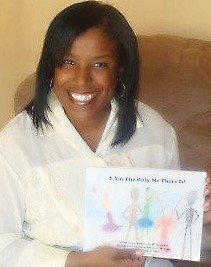 GENESEE COUNTY
— Author and Flint native Kimberly Broome will bring her positive message of acceptance during the first book signing of the recently penned “I Am The Only Me There Is.”

Broome, a Flint Central High School graduate, will hold the event from 2 p.m. to 5 p.m. Saturday Nov. 13 at the Flint Public Library, 1026 E. Kearsley St. in Flint. A mother and former real estate agent, Broome said it was her own children and history that led to the book.

“I would have to say transparently it was a book about the journey I have gone through,” Broome said. At an early age, Broome commented people would make hurtful remarks to her that caused her to become an introvert, making it difficult to open up to others.

Feb. 26, 2010, as Broome said, was the date she chose to put all those remembrances and feelings into a book to show others how special they really are and how they have value to other people in the world. The book goes through the alphabet, providing scriptures along with words such as amazing, beautiful, confident, or the more obscure yare (meaning quick, nimble, lively), which Broome admits to picking up while watching the 1940 movie “The Philadelphia Story,” starring Cary Grant and Katherine Hepburn.

With prodding from her nephew and spoken word artist Edwin “Future” Wilson Jr., Broome started Inspirational Communications and released the title on her own, hoping to spread her message to children and others who need to know they have a place in the world just for them.

“He really started pouring out all this information,” Broome said of Wilson Jr. “I have to really credit him as the driving force behind me getting it published.”

She said the support of her children, 17-year-old Mance II, 14-yearold Kyla, 12-year-old Colton and her husband, Mance Sr., helped create the content by serving as her best critics. Broome called her children “a source of inspiration” and she hopes the process “can help them grow.”

A slot is reserved in the back of each book for a photo to be placed, Broome said, along with a positive confession affirmation where the owner can write something positive about themselves. She said with several cases of

and bullied “You never know what is going on inside of a child.”

The title of the book comes from Broome’s belief “You are the only you there can ever be” and her notion “There is a plan and purpose you can fulfill.”

“I personally feel that everyone does (have a purpose),” she said, adding her life has led to inspiration for another future book, highlighting her upbringing raised by a single mother when her father passed away at an early age and wanting more time with her mother who worked long hours as a nurse. A precursor to her story is a book titled “Motherhood: A Reflection of the Heart of God,” in which she plans to share her insights that many mothers go through the same ups and downs and are not alone.

“My upbringing set the stage for my life now,” Broome said. “It led to a lot of soul-searching and introspection.” Being able to spend time at home with her children and family, Broome happily stated “I’m doing what I want to do.”

Her current book will be available during the book signing, by writing to Kimberly Broome, P.O. Box 190561, Burton, MI 48519, or on her website launching this weekend, www.inspirationalcommunications.c
om.