Local author pens up and down journey 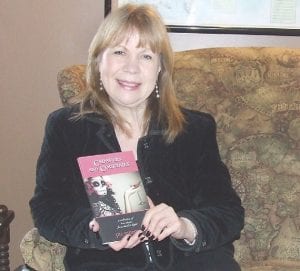 Author Jill Stodola shows off her debut book, “Cadavers and Cocktails,” which she calls “A collection of stories from dark to light.”

GOODRICH — Some stories take more courage than others to tell, and local author Jill Stodola, says this was certainly true for her debut novel, Cadavers and Cocktails.

Having become a widow rather young in life, Stodola tells the story of finding the adventure most of us dream about, which unfortunately turned out to be a bit more than she had bargained for.

The story is not your typical read, and instead is almost a voyeuristic look into the private brief thoughts of a woman caught up in an unhealthy relationship; not quite able to believe that such a thing is happening to her, and strangely unable to walk away until she is almost killed.

Her plain, simple language details the behavior of a controlling and “toxic” lover and strikes the reader with a cold stab of fear.

Starting with the difficult moments, including her husband’s desperate struggle with terminal illness, Stodola documents the “cadavers” of life before detailing the “cocktails”— which, she hopes, will make a difference in other’s lives and perhaps give them the ability to press on in difficult circumstances.

“If someone has a story they need to share it,” Stodola said. “It’s very therapeutic.”

She speaks with fondness of her husband, even the time in the hospital when he was so ill. Although she began writing as a child, the extremes of emotions she experienced during his illness led her to work on what she calls her “Top Shelf” stories, which are named after merely where they were stored, but is also a known synonym for the best of things.

“He had a very positive attitude,” she said of those difficult times, and recalls how medical staff responded by doing everything they could, even though they knew there was little chance of his recovery.

Suffering from multiple organ failure, he developed the rare complication of Graftversus host disease (GVHD) following a transplant; which made his body unable to produce blood. It is rarely seen in the cases of solid organ transplant.

Originally from Duluth, Minn., Stodola still keeps in touch with her husband’s family there. In fact, it was at the impetus of his sister that she wrote the book. Returning from a near death experience with the boyfriend she met a few years after her husband’s death, her sister-in-law told her, “One, leave him. Two, write your book.”

They moved to the Goodrich/Ortonville area with her husband’s work and because his brother lived in the area. She has a son, Ben who attends Goodrich High School and a daughter, Annie, in graduate school.

About being published, Stodola stated it “…helped to unravel my life, give it a richer understanding.”