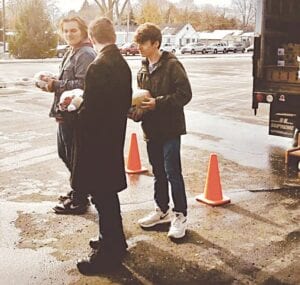 BURTON — It was such a success last year, Tim Look decided he was going to do it again in 2020 – but this time he’ll be giving away more turkeys.

Look, owner of Frozen in Time Treasures and Flint Carpet Company, located on Miller Road in Flint, said he’ll be giving away turkeys again this year to help the less fortunate in the community.

He said he’s purchased 150 turkeys for this year’s event, and it will be at the same location as last year in the Bendle High School parking lot, 2294 E. Bristol Rd., located off Fern and Scottwood streets, Nov. 15 at 1 p.m.

“We did it last year, our first year, and we gave away 100 turkeys before we ran out,” said Look. “This is something always wanted to do.”

He said he felt “very bad” that he had to turn away cars, but admits he had more cars than turkeys. So, this year, he said he was able to order 150 turkeys.

“I would have liked 200, but my budget wasn’t there,” said Look. “I know some cars will be turned away.”

There will be volunteers to direct traffic and hand out turkeys. Look said most of his volunteers are young people, who he’d like to have experience the feeling of giving without receiving anything in return.

He said there will be only one turkey handed out per vehicle and he asks people to remain in their vehicle. While he said he can’t require people to wear masks, the volunteers will be masked and will exercise as much social distancing as they are able to.

There are no requirements to receive a Thanksgiving turkey, he said.

“In our community people are really struggling right now,” said Look. “On those little streets in that neighborhood there are many blue-collar working-class families. I just wanted to make people’s Thanksgiving special.”

He said he will hand out turkeys until he runs out, so everything will be on a first come, first serve basis.

“I’m Looking forward to seeing the people in Burton come out to make this an enjoyable event,” said Look.