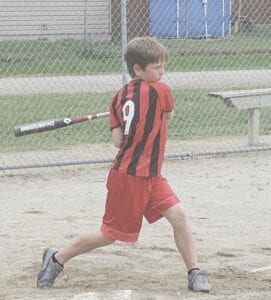 Youth player connects on a pitch

FLUSHING — Organized baseball might be out of the question for many kids during the coronavirus pandemic, but one local businessman is stepping in to provide a safe alternative for players this summer.

Dale Harris, owner of Skip’s Comeback Inn in downtown Flushing, will be hosting the Flushing Summer Pick-up Baseball league starting on June 15. Games will be played on the baseball field behind Central Elementary School every Monday and Wednesday morning from 10 a.m. to noon.

“Any kid can just walk in and play,” he said. “There’s no registration or fee, and we provide the baseballs, bats and bases. We play three outs an inning, but we don’t keep score. It’s the most fun a kid could have in two hours.”

Harris said that the program is open to a wide range of youth—from early elementary school students to middle schoolers. 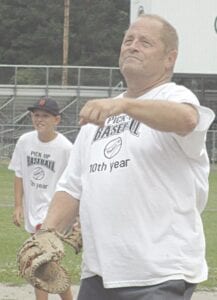 Dale Harris pitching to a youngster back in 2013 Photos provided

“Kids from all walks of life come to play,” he said. “From beginners, to kids who’ve gotten burned out playing travel ball, to kids who later go on to play college baseball. Often, I’ll have the older kids help out the younger ones and shadow them during games.”

While boys and girls receive helpful tips, there’s also plenty of friendly trash-talk to go around the sandlot. Most players in the league wind up with nicknames, ranging from “Hey You,” “It’s My Fault” and “Jellohead” to “Chick Magnet,” “Zombie Man” and “Big Money.”

“I only know a lot of the kids by their nicknames and not their real names,” said Harris, who’s known to the players as “Napman.”

Harris, who turns 71 in August, said that the pick-up league basically started as a practice session for his youngest son and his buddies. But the “practices” soon drew large groups of neighborhood kids, eventually turning into one of the area’s longest-running baseball programs.

For Harris, the league has become a way to give back to the community. He said that he values the chance to instill life lessons to players and give them an encouraging environment to play in.

“There’s no obligation for them to show up for every game, but they love to come back each week,” Harris said. “For me, it’s the most fun I’ve ever had athletically.”

In light of COVID-19 concerns, Harris said that he and his helpers will create a safe environment for kids to play in, offering plenty of room for social distancing in the bench areas and the field itself. Parents are also welcomed to stay and watch the games.

In addition to baseball, kids will get to enjoy “Hot Dog Day” on the Fourth of July week and celebrate the end of the season in August with ice cream from Cops & Robbers.