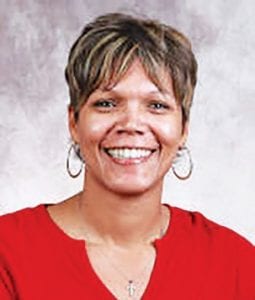 LINCOLN, NE. — After dominating the area prep sports scene during her time at Carman-Ainsworth, Shimmy Gray-Miller has turned that status into something bigger. Specifically, she’s parlayed her experience with the Lady Cavs playing center into a career coaching college basketball and is currently an assistant coach at the University of Nebraska.

“I am the recruiting coordinator here at Nebraska and I work with the post players on their on-court development. It’s been an easy transition for me because I don’t have a big ego, so I don’t need to be the one in charge,” said Gray-Miller. “My quality of life is much better as an assistant than it was as a head coach. I work just as many hours, but I don’t stress out about as many things as I did before.”

While at Carman-Ainsworth, Gray- Miller not only played basketball, but was also a member of the track and field team. This included competing in the 400 dash, the 4×400 meter relay, 800 meter relay and the open 200. During that time she was also the first Flint-area track athlete to place at the state meet for four years straight and was twice issued All-State honors.

“I love the game of basketball. It’s my passion. And someone told me once the key to success was discovering your passion and figuring out a way to make a living with it,” Gray-Miller said. “I’ve done that. My time in this profession has been incredibly rewarding. Life and basketball have a lot of parallels. You learn a lot about other people and yourself throughout the course of a season.”

After high school, Gray-Miller went on to play for the University of Michigan women’s basketball team. Among her accomplishments during that period was being named team captain as a senior.

“Comparing (Div. 1 basketball) to other levels is like comparing junior high sports to varsity sports. The scrutiny is more intensified because there’s more pressure at this level,” Gray-Miller said. “There’s more at stake as far as the amount of investment that’s been made. On the court you’re working with some of the greatest athletes in the country so the level of play is more competitive and often times more pleasing to watch.”

Prior to her current position, Gray- Miller was the head coach at St. Louis University from 2005-2012. She also spent time as an assistant coach at the University of Washington from 2000- 03 and The University of Arizona from 2003-05.

“When I go to bed at night I actually fall asleep instead of laying awake thinking about all the things that could go wrong,” said Gray-Miller.

During her time with the Cornhuskers, highlights for Gray-Miller according to www.huskers.com include in her second season as recruiting coordinator, helping the Huskers land the best class in school history. Nebraska’s six-player class, which included Jasmine Cincore (Tennessee), Natalie Romeo (California), Darrien Washington (California), Chandler Smith (Washington), Kaylee Page (Kansas), Emily Wood (Kansas), was ranked as the No. 9 class nationally by ESPN.