Students at Grand Blanc Gymnastics perform tumbling moves during the Tumblethon to support the Hurley Neo-natal Intensive Care Unit (NICU). On the right in the dark leotard is Ashlen, who was herself a NICU baby at the hospital. Photos by Paula K. Schmidt

One of the children Taylor, from Burton, started out at Genesys Hospital on Nov. 9, 2011. She has now been tumbling for more than three years, but her mom’s full-term pregnancy took a sudden turn when she had to have an emergency Caesarean section. Taylor had Persistent Pulmonary Hypertension and her lungs collapsed and she couldn’t breathe and she was transferred to the Hurley NICU.

Sadly, Taylor developed a severe lung infection which challenged the doctors for several weeks. Her grandmother, Jeniel Payne reported the doctors said her lung infection was one of the worst they had seen and not until the fifteenth day when they used a new medicine, did she start getting better. They slowly took her off all the machines, and she opened her eyes and was able to finally be held. By day 20 she was ready to go home. 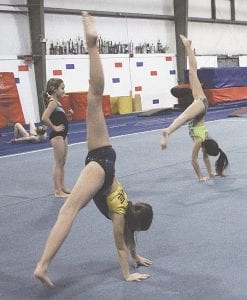 “Taylor is seven years old now and if it wasn’t for the doctors and nurses at the Hurley NICU, we wouldn’t have her with us,” Payne said. “One of the doctors said “her and God had a conversation and she decided to stay her with us and she woke up,” she reported.

Another example of a child helped by the Tumblethon is Burkley of Burton, who was born at Hurley 10 weeks early and weighing just barely three pounds. She required assistance to eat, breathe, and more but made steady progress each day.

She and her twin brother Bowe received the best of care and after nearly two months in the NICU, they were able to come home.

Many students of Grand Blanc Gymnastics will cartwheel for a good cause during the week of February 25 to raise money for babies like these through the Children’s Miracle Network Hospitals at Hurley Children’s Hospital. This year the donations will go directly to the Neonatal Intensive Care Unit (NICU). 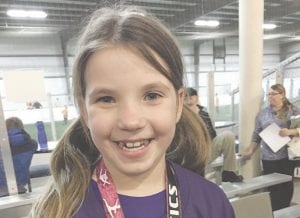 “Our main goal at Grand Blanc Gymnastics is to teach children life lessons through the sport of gymnastics. We believe that helping others in need is one of those vital life lessons that should be taught at an early age. All of the funds raised go directly to help the children in THIS community. We are proud to be part of such an important annual event. Our gym and our 500- plus students are proud to support Hurley in this important effort. We want to do everything we can to help the children at Hurley,” said Chelsea Hopkins of Grand Blanc Gymnastics.

The Tumble-a-thon will feature gymnasts from toddlers to high school students performing forward rolls and cartwheels for 60 seconds to raise money for the Children’s Miracle Network Hospitals. People can either make a single donation, or make a donation per gymnastic activity. — P.S.