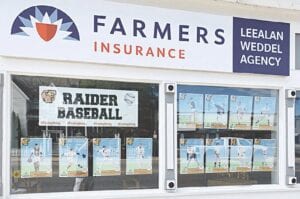 Twelve Flushing senior baseball players are featured in a baseball card tribute at LeeAlan Weddel’s office in downtown Flushing. The cards will be displayed all summer long. Photo provided

FLUSHING — When the Flushing Varsity baseball team lost out on a promising season because of COVID- 19, local insurance agent LeeAlan Weddel decided to give the senior players a special tribute this summer.

Weddel, owner of the Farmers Insurance Agency in Flushing, has installed a decorative homage to Flushing Raider baseball in the front window of his office on Main Street. The display features a series of 14×19 baseball cards that depict the names and pictures of Flushing’s senior players from the 2020 varsity baseball team.

“I wanted to do something cool and positive for the seniors, to counterbalance all of the other stuff going on in their lives,” Weddel said. “I thought this was the least we could do to honor them after they lost their final season in a Flushing uniform.”

2019 proved to be a successful year for the Flushing Varsity baseball team, which cruised to a 31-6 record and went undefeated in Metro League play. With 12 seniors returning this year, the Raiders were expected to dominate their conference once again and compete for a state title. 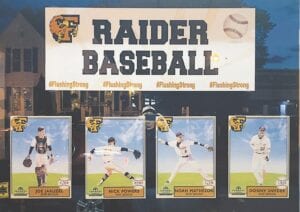 But once COVID-19 hit the state in March, high school baseball and all other spring sports had to be cancelled. This brought Flushing’s championship aspirations to a grinding halt.

Weddel, a big-time baseball fan, said he was looking forward to seeing the Raiders play for a state championship this year.

“I thought to myself, ‘Gosh, if I’m so disappointed that I didn’t get to see them in action, imagine what those seniors feel now that they can’t play,’” he said. “They had something special stolen from them.”

That’s when Weddel came up with the idea to showcase each Flushing senior player with their own baseball card. After sharing his idea with several of players’ parents, he began gathering pictures and asking around for design help.

By May 30, the cards were ready to be displayed—just in time for the Flushing High School senior car cruise that came through town on May 31. 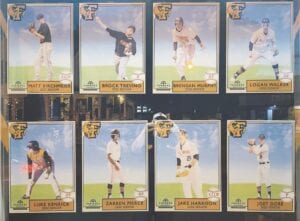 “It was so cool that the players who were in the car cruise got to drive by and see their pictures,” Weddel said. “Moms of the players have told me how the cards have brought smiles to their faces, and a couple of the players have sent me notes to thank me for doing it. The reaction has been incredibly positive.”

Weddel wishes to thank Kregg Matheson for securing all of the player photos for the baseball cards; Brian and Pamela Hilton for designing and editing the cards; and Mary Smith from I Can Market That for printing the final product.