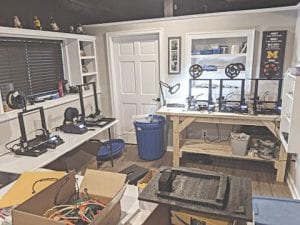 GOODRICH — It all started with the purchase of a 3D printer to have fun with around the house during the COVID-19 shelter-in-place order.

That’s how Chad Robertson, his wife Christine and their family started making face shields as personal protection equipment (PPE) for first responders and medical personnel. Now, they are producing hundreds of shields daily and are trying to grow their response to the COVID-19 pandemic by helping others get started by making shields from home.

“The face shields all started with these printers I got for fun while stuck in house,” he said. “I found articles on making PPEs said, ‘I can do this’. So, I made some and offered them on a Goodrich Facebook page and we got overwhelmed.”

Robertson said he doesn’t want to make any money off making and distributing the masks, he just wants to help as many people as he ca. He started a GoFundMe page and with money he has raised, he’s bought five more printers and enough polylactic acid (PLA), the plastic used in 3D printing, to produce shields for another two weeks. 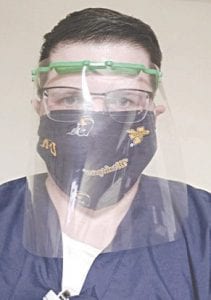 An example of a completed face shield being worn.

Two weeks ago, he said he was making 250 shields a week. But through streamlining his process and adding printers, he was making about 250 a day Monday and Tuesday last week and was about to reach 300 a day by last Thursday.

Robertson, a 1997 graduate of Davison High School, said his family has been a big help, with his wife, Christine, working on logistics and production, son Luke constantly cleaning the plates in the printers, and daughters Mia and Haley helping with shipping.

The circle of people involved in the effort extends beyond the Robertson family, with friends and people he hasn’t even met helping with all aspects of the making and distribution of the face shields.

He said he has distributed shields to friends and family working at Ascension Genesys and McLaren Flint, Genesee County Sheriff’s Department in Goodrich and the Davison- Richfield Fire Department. 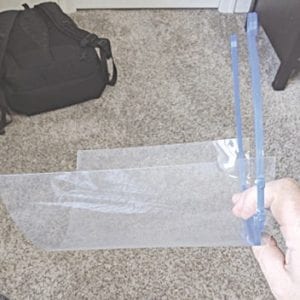 A close-up view of a shield.

“We’re giving them to first responders, hospitals, group homes,” said Robertson. “We’re trying to help everybody we can.”

Robertson said he was “Born to do this stuff.” He said he has been a scout master, a Shriner clown and is a Mason and he said he enjoys helping others.

With the local operation costing about $800-900 a week, he said he hopes to keep the effort going as long as there’s money coming in.

He said he wants everyone to know he’s there to help anybody in Michigan who would like to take part in making more shields. Robertson said he’s willing to supplying people with printers and PLA, with the caveat that when this is over, they must donate the printers to a local school district.

Already, he said he has plans to donate his printers to area schools, including Kearsley, Goodrich and his alma mater Davison High School.

Some days he said he feels drained after doing his job and working on making face shields, but in the end, he said it all comes down to helping others.

Robertson said he received a picture of a woman who received one of the shields, who is a healthcare worker, and her family. The message along with the photo was from the woman’s mother, who said the photo was a reminder of the people’s lives he’s saving through his efforts – the woman’s daughter and grandchildren.

To help, visit the GoFundMe link