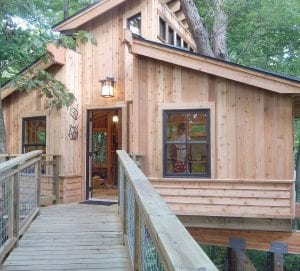 A view from the outside of the treehouse. “Treehouse Masters” chose this specific location due to the health of trees – it is built around Black Cherry, Red Oak, Butternut Hickory, Basswood, American Elm and White Oak – and its overhead view of Kearsley Creek.

BURTON — For-Mar Nature Preserve and Arboretum in Burton has revealed a brand new, 330 square-foot treehouse on its property built by the crew from Animal Planet’s “Treehouse Masters”.

It all began in 2014, when the kids at For-Mar were asked to create an ideal treehouse layout and present it to the Genesee County Park Commission. Director Amy McMillan, after witnessing the kids’ ideas, decided to create a “treehouse fund” out of the yearly parks budget.

McMillan also submitted an application to Animal Planet’s “Treehouse Masters,” but it was not until two years later – right at the moment proper funds had been raised – the show contacted Genesee County Parks to spearhead the project. Nelson Treehouse and Supply arrived in Burton at the beginning of July and began construction on Aug. 1.

Nelson had certain restrictions to abide by — for instance, the treehouse needed to contain an outdoor classroom space able to hold at least 30 kids. The preserve plans on teaching nature programs from the enclosure, utilizing newly installed equipment, such as a microscope and projector.

“Many home-schooled kids come to [For- Mar],” said Fulcher. “This is a big part of their science learning.”

The treehouse also marks the first built by the show to be universally accessible. A ramp, in compliance with ADA guidelines, was installed, enabling any person to take a look inside.

Last, but not least, the house will serve as the official headquarters for the Nature superheroes, The Preservers – representations of each member are exhibited along the walls of the inside. Featured in their own line of comics drawn by local artist Randy Zimmerman, the heroes fight to keep the planet and park safe.

Though pictures of the inside are discouraged until the official airing, the treehouse will be open to the public on Aug. 24. Staff will be on-site to monitor and give tours to the new guests.

“The crew has been fantastic to work with,” said Fulcher. “They seemed to really enjoy the opportunity.