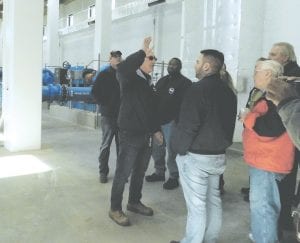 A water treatment plant employee leads a tour of the facility.

A Tuesday, Nov. 21, press conference included tours of the facility that will convert raw water drafted from Lake Huron into a potable resource for more than 200,000 customers along the 67-mile trajectory of the Karegnondi Water Pipeline.

Before the commencement of water delivery, the facility was locked down by the Department of Homeland Security for the duration of operations.

“The (pipeline) and treatment facility came in on time and on or below budget,” said Wright. “It will save hundreds of millions of dollars over the next 30 years. It will stabilize (water) rates. No more annual, double-digit increases. Most importantly, our children and grandchildren will have the lowest water rates in the Great Lakes region, and a system to last 100 years.”

Wright said the availability of affordable raw and treated water will stimulate growth, particularly in the agricultural, food processing and “green” industries that will benefit from the availability of raw water for about 10 percent of the current going rate.

“This water will be used for things we can’t even think of today,” Wright said.

“We’ve secured the economic future for our children and grandchildren,” Young added. “We are no longer beholden to a third party. (We will have) no more unreasonable and unwarranted price increases. (Karegnondi provides) a stable source of clean, safe, affordable water.”

The 94,000-square-foot treatment plant, accessory buildings and retention basins sit on 80 acres surrounded by agricultural property at Stanley and Marathon roads outside of Columbiaville. The facility cost $72 million.

The authority broke ground on the $274 million pipeline in 2013.