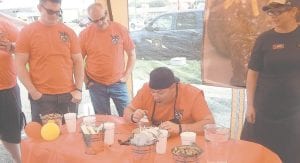 The Michigan State Police Department partnered with Texas Roadhouse Saturday for an event combining good food with a good cause: a rib-eating contest to benefit the Children’s Chemo Clinic at Hurley between local police and fire departments.

Two different competitions took place – one at noon and the other at 3 p.m. – and the fire department were crowned victors both times. Firefighters present included officers from Swartz Creek, Burton Station 1, Flint Township; on the police side, Flint Township, Michigan State Police, UM-Flint, Flint City.

Ten-percent of sales from the food went to the Pediatric Chemo Clinic Child Life Program at Hurley Children’s Hospital.

Amy Belanger, a Michigan State Police trooper, said she organized the event with Joshua Cervantes of the Burton Station 1 Fire Department. It is the first time such a competition has been held at the restaurant.

Belanger said, although the police side couldn’t manage to eke out the win in the final minutes, the first-year was a success. The police side switched up their players for the second-round, while the fire department had a few repeat competitors.

“It was an opportunity some friendly competition between the fire departments and the police departments,” said Belanger. “It brings everybody together.”