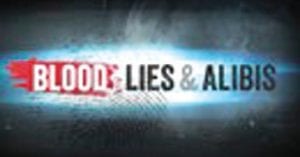 Randy Kimes, a retired Flint Township police detective who lives in Richfield Township, gained first-hand insight when he was filmed for an episode of “Blood Lies and Alibis,” a crime-solving reenactment show on the Investigation Discovery channel.

“Flint Serial Slasher” takes viewers behind the scenes of the investigation leading to the capture and conviction of Elias Abuelazam. an Israeli native, suspected of 18 stabbings and five deaths during the summer of 2010. He is now serving a life sentence for one of those crimes.

Most of Abuelazam’s victims lived in Flint, but the death of Frank Kellybrew, 60, who was found in a pool of blood on Miler Road on July 30 brought Kimes into the investigation.

Kimes is acknowledged by local law enforcement as the detective who first made the connection of a serial killer on the loose, linking similarities between Kellybrew’s murder and a series of stabbings in in Flint. In fact, Kimes won several local and state Officer of the Year awards for his work on the case. 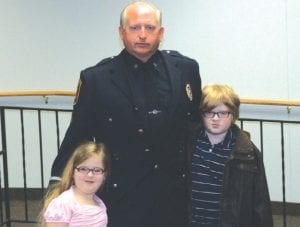 Randy Kimes shown with his grandchildren after being promoted to sergeant last year.

Kimes also worked on the Task Force that eventually caught Abuelazam including spending weeks tracking evidence and an all-night surveillance outside of the east-side Flint house where Abuelazam lived.

But Kimes role in the investigation was essentially lost in the TV reenactment.

His is the first of many familiar local faces shown on the one-hour show which first aired in July and was shown again on Sept. 17. But most of the story is told onscreen by others including county prosecutor David Leyton, Michigan State Police Detective Patrick McGreevy, local TV journalists and the victims.

“They interviewed me for two hours and all I got was 15 seconds (on tape),” Kimes said, explaining that he and McGreevy were asked the same questions and the latter’s responses were chosen for the show.

But Kimes is not splitting hairs. He acknowledges great detective work and a team effort caught Abuelazam fairly quickly before he could claim more victims..

After taping the Sept. 17 airing and watching it four times, Kimes gave an inside scoop on what was real and what was fake.

For one, they don’t really go into how the case was broken, he said.

Just about everything on the show was a reenactment by actors. Even the Flint City police officer portrayed was not a real one. Background scenes like the one inside a north Flint party store where Abuelazam worked was not the actual store, Kimes said.

Kimes was misidentified on camera as a Flint Police Officer.

The Kellybrew murder scene rated only a 10-second glimpse with most of the focus on Flint crime scenes and victims.

Also, the show only describes blood from one of victim found on a pair of jeans in Abuelazam’s suitcase when it was confiscated at the airport in Atlanta where he was arrested minutes before boarding a flight back to to his native Israel.

There was no mention in the show of Kellybrew’s blood on the laces of a pair of Abuelazam’s size 16 tennis shoes also found in the suitcase..

“It is a made-for-TV-show and about 90 percent accurate,” is how Kimes sized up the TV version of “the biggest case I have ever been involved in.”

He’s not planning to rest on his laurels.

Now retired from the the Flint Township force after 25 years of service, Kimes is not going let all of his police experience go to waste. He is looking at several job offers including possibly as a police chief.