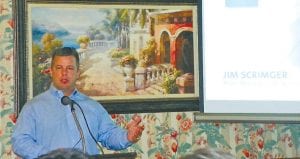 FLINT TWP. — Since emerging from bankruptcy in 2009, a leaner, focused General Motors has grown in jobs and production, according to Jim Scrimger, plant manager, at GM North in Grand Blanc.

GM now operates five plants and three customer care centers in the Flintarea, said Scrimger, who grew up locally and has worked for GM for 23 years. GM employs more than 7,500 people locally, up from 6500 last year with payroll growth from about $462 million in 2010 to $581 million in 2011 and payroll taxes increasing from about $88 million to $118 million in that same time frame, he said.

“This is a facility that has produced multiple trucks of the Year and continues to innovate around engine technology and transmissions to be on the leading edge of the truck market,” Scrimger said, calling it GMs bread and butter.

Scrimger noted that all these plants also work with an extended outside network of contract employees and service providers, broadening its employment base.

GM began Customer Care and Aftersales in 1969 and moved the national headquarters to Grand Blanc in 1997, Scrimger said. At both headquarters and local plants, it employs 733 hourly workers and 1,170 salaried workers. In 2011, it paid $105.1 million in wages, $20.8 million in payroll taxes and $1.3 million in property taxes.

As for production, Flint Assembly which makes trucks added a third shift in August and promoted 235 temporary workers to full-time employment, he said.

Flint Metal has increased its workload and runs a number of presses on three shifts as a result of streamlined stamping operations.

Shrinking its broad stamping plant operations of the past, the new GM has tried to attach stamping operations to assembly plants to minimize transportation costs, Scrimger said.

As a result, Flint Metal is one of three of the last major high volume mills in the U.S. Pre-bankruptcy a typical stamping plant ran at about 55-60 percent use of its space and equipment, Scrimger said. Now Flint Metal is running between 90 and 95 percent utilization.

Flint Engine soon will be adding a third shift as the 1.4 liter engine goes into production for the Chevrolet Volt, Cruze and Sonic, he said.

The CCA Burton processing plant will also be adding a third shift to meet a greater demand for service and parts.

On its road to recovery, GM embraced a vision to make the world’s best vehicles focused on four core brands: Chevrolet, Buick, GMC and Cadillac. It shed old nameplates including Saturn, Oldsmobile, Hummer and Saab which Scrimger said, in his opinion, contributed to the company’s financial instability when the economy tanked.

Scrimger ended with a look at GM’s design direction.

The Chevy Cruse and Sonic are strong sellers and the Volt represents a new direction for GM in the small car market.

He also mentioned that GM is coming out with a radical new Impala that returns to its heritage of the 1960s and 1970s.

“There are a lot of great products coming out and a lot in the pipeline,” he said.

One of the advantages Scrimger enjoys about working at the tooling center is that he sees designs about two years in advance of production.

Scrimger said he is very excited about the direction GM is headed.