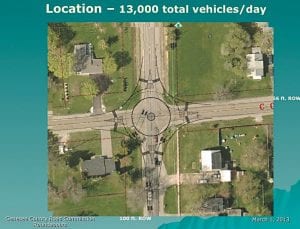 This aerial view shows a diagram for building a roundabout at the intersection of Court Street and Dye Road.

GENESEE COUNTY — A controversial decision to place a roundabout at the intersection of Dye Road and Court Street in Flint Township may soon have broader impact.

Multiple intersections in Grand Blanc Township are being looked at for future roundabout intersections, according to John Daly, Genesee County Road Commission (GCRC) director, who spoke recently at the monthly Grand Blanc Chamber of Commerce breakfast.

Daly touted the Dye/Court plan as the most efficient way to correct what the GCRC calls a “problem intersection.” Daly said that based on the accident history of this intersection, it not only is a hazard, but qualified for federal safety funding which will be used to build the roundabout.

One of the biggest safety factors of a roundabout, Daly said is the reduced speed. Also, the possibility of T-bone or rear-end accidents at high speed is virtually eliminated. “Just driving down the number of accidents will be worth it,” he added. “I think we’re doing the right thing here.”

The biggest point of contention is actually just resistance to change and fear of the unknown on the part of local drivers, Daly said. This has been typically seen in other municipalities before the installation of roundabouts, but reverses once people become used to the novelty, he said.

“This is your money,” Daly said, of road improvement funds. “I am investing it for you…to get the most good out of it.”

The Dye/Court project is anticipated to start in early 2014 as soon as weather permits and will hopefully be finished in time for drivers to get used to it before bad weather arrives, Daly said.

The project is moving forward despite opposition from many residents at a public hearing in 2012 and the Flint Township Board voting not to participate in the project.

Since then the GCRC has also been involved in pitching a roundabout for the intersection of Elms and Hill roads in Mundy Township.

The Grand Blanc area may be targeted in the future as well, according to GCRC Engineer Fred Peivandi, who said the intersections of Grand Blanc and Embury Road, Belsay and Hill Road, and Linden and Grand Blanc Road are all being looked at as possible locations for a future roundabout if funds can be procured.

In an unrelated matter, funding also continues to be an issue for the Dort Highway Extension project as well, according to Peivandi, who said it is currently in the survey and preliminary engineering stages in anticipation of future funding. Proposals for engineering work were due to GCRC March 1 and they anticipate approving one of those the first week of April. Then it will go to the Michigan Department of Transportation for approval.

Peivandi said the Dort project is “…important to not only this portion of the county, but the county overall,” including being a vital part of future expansion of the Genesys Regional Medical Center.