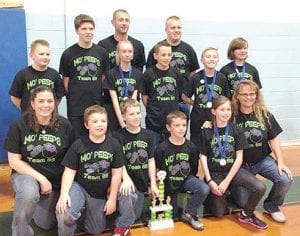 Mo Peeps, FLL Robotics Team # 88 – based at Rankin Elementary School have done it again – topped the competition and scored their way to compete in the state tournament next month. Leanne Welch, (front, far right) is their coach.

The Banana Bricks, a team based at C-A Randels Elementary, and the Goodrich Martians scored first place in Robot Awards. Banana Bricks won for Innovation & Strategy and the Martians won for Robot Performance.

The award recognizes the team’s efforts to design, build and improve a robot, using sound mechanical engineering, said Tom Wickham, a Banana Bricks coach. The team also had to clearly define the robot game strategy and employ innovative features that allowed the robot to complete its missions, he said.

Overall, 29 teams of 9 to 14 year-old children and there coaches convened to demonstrate their problem-solving skills, creative thinking, teamwork, competitive play, sportsmanship, and sense of community.

This year’s Challenge — “FLL World Class” – called for teams to research and present their own creative solutions to one of today’s most relevant topics: the future of learning.

The FLL competition was judged in four areas: project presentation; robot performance; technical design and programming of the robot; and teamwork, with a consideration of the FLL Core Values.

Teams programmed their LEGO Mindstorms robots to solve a set of missions on an obstacle course that included pushing a lever to open a door to learning, moving an idea outside of the box, loading a model with knowledge and skill loops, and more.

Mo Peeps was one of eight top teams who will advance to the State Championship match in Monroe on December 9. The Mustangs team from Flushing, the Radioactive Atoms of Grand Blanc and the Martians of Goodrich are also among teams moving on to the state tournament. Other top teams were from Haslett, Clarkston, Waterford and Bloomfield Hills. — Rhonda Sanders