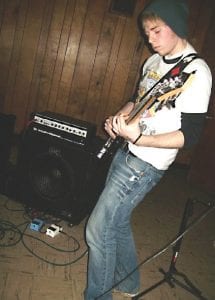 Vukelich said when he wanted to learn how to play guitar as a sophomore in high school, he went to his grandmother, a 60-year veteran of the instrument.

After they discovered that her 1952 Silvertone she intended to give to him had broken tuning knobs, Donnie went to a local music store to purchase him a new one.

“She taught me two chords and sent me home,” said Vukelich. “I was so excited that when I got home, I sat on my bed and I played until my fingers blistered. It was a mess.”

Before that, Vukelich’s musical knowledge was limited to a middle school attempt at the saxophone.

It wasn’t long until the self-taught Vukelich, who turned to the internet to fine-tune his skills, was playing talent shows and end-of-the-year concerts at Kearsley High School.

On the day of his final exams, he found that he was having trouble holding his pencil because he practiced so much the night before.

“The guitar was something that I wanted to do for a long time,” said Vukelich. “It’s refreshing to pick up a guitar and get onstage with it.”

Now the bassist for local alternative band Earl Grey, Vukelich, 19, joined the band two months ago, replacing another member and setting down his guitar to take a crack at the bass guitar.

“It was a little awkward sometimes,” Vukelich said of taking the place of a founding band member. “I thought I might have been a temporary fixture and they’d ask him back into the band. But they didn’t.”

Vukelich recently bought a new bass, an Epiphone Thunderbird IX. After switching to bass, he says that the “style and mindset” of the two instruments are very different. He’s swapped melodic riffs for energetic rhythm beats.

Performing on stage is a natural extension for Vukelich, who is now completing his first year of college at the University of MIchigan-Flint as a theater major.

He met fellow Earl Grey member Matt Coggins while the two were auditioning for a play in the theater department. They became friends and discovered that they shared common music interests.

Vukelich cites such bands as The White Stripes, The Decemberists and Modest Mouse as his influences.

He said he plans on being in the band “for the long run” and doesn’t find it difficult to work with four other bandmates, as they share rehearsal space in a basement.

“It’s a collaborative effort. The songs feel like they write themselves,” Vukelich said.

Earl Grey will showcase their repertoire of all-original songs March 12 when they compete at “The Next Big Thing Tour” national battle of the bands at Clutch Cargo’s in Pontiac for 20 hours of professional studio time.