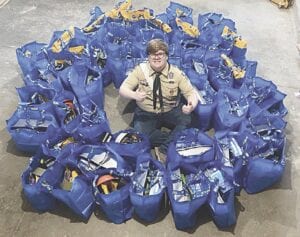 For his Eagle Scout project, Austin Cook put together care packages for people who adopt pets from the Humane Society of Genesee County. Courtesy photo

SWARTZ CREEK — Austin Cook was already trying to come up with an idea for his Eagle Scout project a couple of years ago when his family adopted two cats – Dipper and Mabel – from the Humane Society of Genesee County.

He had never been to the Humane Society before, and the experience of seeing so many pets just waiting for someone to love tugged at his heartstrings.

“After we got our cats, I thought maybe I can come up with an idea to help people adopt,” said Cook, a 17-year-old Swartz Creek High School senior. “That’s where the plan for the goodie bags formulated.”

For his project, Cook raised money and collected donations of items to fill 50 care packages for families adopting cats and dogs from the Humane Society.

“We raised more than what was expected, so I got to do more than I originally planned,” he said. “My original idea was to do 20 bags for cats and 20 for dogs, but with the extra money we got, I was able to do 50 bags and I was able to upgrade the bags of food for both animals.”

Cook, a member of Boy Scout Troop 122, said it felt great to be able to help the homeless pets, and he hopes to do more.

“I was really excited,” he said. “I was actually doing something to help these pets with adoption.”

Cook has been active in scouting since he was 6 years old. He enjoys camping and learning survival techniques. He also appreciates the camaraderie.

“Without scouting, I would definitely be a very different person,” he said. “I see myself as more outgoing and more of a leader with scouts, because it taught me to do all that. The skills I’ve learned will help me go places.”

After graduation, Cook plans to attend Mott Community College for general education while he figures out a major. He also plans to remain active in scouting as a leader, and he looks forward to helping other youth achieve their goals.

In addition to scouting, he enjoys camping, playing video games and driving around, and he is involved in South Baptist Church.