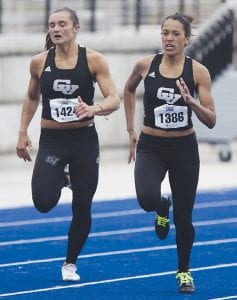 ALLENDALE — Having just finished her sophomore season with the women’s track and field team at Grand Valley State University, Carman-Ainsworth grad Brittney Banister proved to be a key cog for a team that placed third at the National Collegiate Athletic Association Div. II outdoor championship May 23-25 in Pueblo, Colorado.

“Brittney is a fierce competitor. She understands that being competitive in practice is equally as important as being competitive in the meet,” said GVSU assistant track and field coach Keith Roberts. “I believe that this is her greatest attribute. She has also worked extremely hard in the weight room. Prior to coming to GVSU, she had very little weight training. I believe another year of lifting will take her to another level.”

Results for Banister at the national meet include running the final leg for the 4×100 relay team that finished sixth to earn All-American honors while also setting a new school record by clocking in at 45.58. As for the 2013 Great Lakes Intercollegiate Athletic Conference Outdoor Championships May 1-3 at Ashland University in Ohio, Banister came in second in the 100 dash in 12.07 and third in the 200 dash with a time of 24.38.

“Brittney ran on both our 4×100 and 4×400 relays (3:41.48) at the NCAA Championships,” Roberts said. “We broke school records and brought back All- American honors in both. We’re looking to continue this success next season.”

During the 2013 outdoor regular season, Banister managed to place third in the 400 dash at the Hillsdale Invitational on April 13 in 58.56 and helped the 4×100 relay team take the top spot in 46.97 as GVSU won the event with a team score of 184.5. Banister also managed to dominate at the season-opening Battle of the Valleys on March 30 against Saginaw valley State University at GVSU by winning the 100 dash in 12.29 and running the final leg for the 4×100 relay squad that was disqualified.

“I look forward to Brittney demonstrating how hard work in practice pays off,” said Roberts. “Next season, her biggest role will be leading by example. Brittney never slacks in practice. Her work ethic can spread to our underclassmen.”

Banister proved to be just as valuable to GVSU during the indoor season by posting a preliminary time of 7.63 in the 60 dash at the NCAA Div. II Indoor Championships in Birmingham, Alabama. The former Lady Cavalier also competed as part of the 4×400 relay unit that came in at 3:45.58.

“Brittney’s major (is) allied health. She is very focused on her academics and works hard in the classroom,” Roberts said.