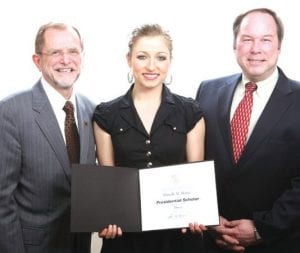 FLINT TWP. — Danielle M. Mattar, a graduate of Carman-Ainsworth High School, has been named a 2013 Presidential Scholar at Western Michigan University, the highest honor that is bestowed on an undergraduate.

She is one of is 44 students in WMU’s 6,386-member senior class to receive the award.

The Presidential Scholar award goes to the most outstanding seniors in each of the university’s academic schools, departments and specialty programs. Only the highest caliber of students receive the award. They are selected on the basis of their general academic excellence, academic and artistic excellence in their majors, and intellectual and artistic promise.

Mattar is the Presidential Scholar in Dance. She is major- ing in dance and expects to graduate in April 2013. Following graduation, Mattar plans to perform, teach and choreograph professionally, then attend graduate school and earn a Master of Fine Arts with the goal of becoming a professor at a university.

One of the highlights of her years at WMU was receiving a College of Fine Arts Global Initiatives Grant. Through this grant, she was one of eight dance majors selected by her department to study abroad in Taipei, Taiwan, and Chengdu, China, in summer 2012. Mattar has also received scholarships, including the 2012-13 Robert d. Maverick Theatre and Dance Endowed Scholarship, 2011-13 Arthur E. and Martha S. Hearron Student-Faculty Enrichment and Student Scholarship Endowment for Dance, and 2011-12 Cleland and Ellen Weber Dance Scholarship.

Outside of the classroom, Mattar has been involved with two organizations for the past three years. They are WMU’s Orchesis Dance Society, of which she is serving as president this year, and Hip Hop ConnXion Michigan, for which she has been serving as captain since 2010.

Mattar was recognized along with this year’s scholars during the 33rd annual Presidential Scholars Convocation, held on campus March 21. During the event, the students received certificates from Dr. John M. Dunn, president of WMU, and Dr. William G. Rantz, president of the WMU Faculty Senate.

The convocation, which also celebrates the overall excellence of the University’s students, is sponsored by the Office of the President and Faculty Senate at WMU. It included a program and closing reception. Many Presidential Scholars will graduate from WMU Saturday, April 27, during spring commencement exercises. — Rhonda Sanders