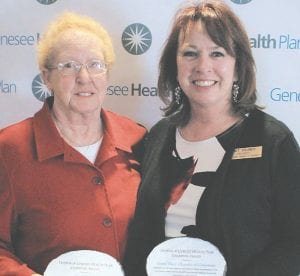 GHP recently honored community leaders and featured students who earned kudos and scholarships for writing about their family’s health.

Following an invocation where First Missionary Trinity Baptist Pastor Ezra Tillman noted all the honorees were “playing a part in the progress of humanity”, Grand Blanc High School student Omar Naguib took home the first-place award in the essay category.

He wrote about his mother’s encouragement of good oral health from the time he was young, even though he didn’t always appreciate her efforts. He also noted the power of a healthy smile, not only in maintaining health in the body, but promoting self-confidence, self-esteem, and mood. 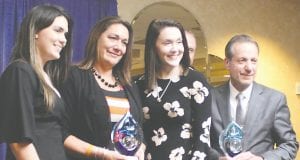 The family of the late Nick Evans, formerly of Ascension Genesys, stands with Ascension Genesys President and CEO Chris Palazzolo following the posthumous award to Evans for his visionary leadership in health care for veterans and the elderly.

Other winners from Grand Blanc included Jet Kilmer, representing Grand Blanc Chamber of Commerce, as Malinowski said the local chambers were very helpful in promoting the millage passed by voters last year. Also honored was Barb Smith, who many residents might know better in her role as the Director of the FISH food pantry. Smith volunteered to be one of the patients used in the plan’s advertising who had benefited from GHP services.

Smith said she thinks she would not be alive today if her physician had not referred her to the plan, where Director of Operations, Linda Gibson, helped her write a grant which paid for surgery unblocking her left carotid artery and correcting issues she had due to small veins.

President and CEO of GHP Jim Malinowski served as Emcee of the evening, noting the essay contest focusing on family history was the brain child of physician Yvonne Lewis who believed though it’s not something often talked about, health history was vitally important to pass on to children so they could make good choices with the knowledge of risk factors and other information. 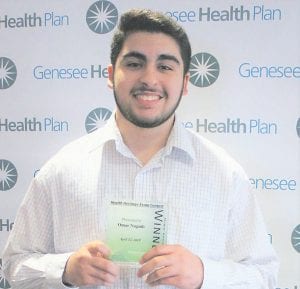 Another honoree from Grand Blanc was Nick Evans, who served with Ascension Genesys and died last year due to a heart attack. Evans was honored for his tireless efforts in obtaining better access to care for local veterans as well as the elderly, in his role as the Vice President of Business and Fund Development.