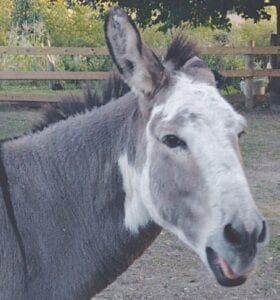 Neglected and abused farm animals have a safe haven at Charlie’s Forever Farm in Clayton Township. Photo by Lania Rocha

CLAYTON TWP. — Ranae Bauserman remembers looking out over the 10 acres she and her husband, Matt, bought eight years ago, and envisioning “an amazing farm” for rescue animals.

Bauserman, a teacher at Morrish Elementary School, grew up on a farm near Gaines and always dreamed of providing a safe home for farm animals in peril.

Today, that dream is coming true at Charlie’s Forever Farm. The Bausermans have saved five donkeys and a horse so far.

They acquired the first two donkeys, Cash and June, in June 2019 through Peaceful Valley Donkey Rescue, which rescued the animals from “an abusive farm” in South Carolina, Bauserman said.

“She was a 4-H horse and the owner could not care for her any longer,” Bauserman said.

Two weeks ago, the menagerie doubled with the addition of three more donkeys: Grace, Willow and Levi.

“They were in a kill pen in Mississippi,” said Bauserman. “I found out about them on a Thursday, and by Saturday, I had raised $2,200 on Facebook (to help rescue them). Between me and a rescuer in Maryland, we collaborated. It was a big rescue.”

Charlie’s Forever Farm is named in honor of Ranae’s and Matt’s fathers, both of whom were named Charlie.

“My dad was a farmer, and this was always his dream for me,” said Bauserman.

She and her family – including children Justin, 22, Garrett, 20, and Makenzie, 16 – are working on getting the animals socialized, and waiting for approval on a 501© nonprofit status application.

On Thursday, Sept. 17, the family hosted an open house on the farm so the community could meet and greet the newest inhabitants.

For more information, check out Charlie’s Forever Farm on Facebook.