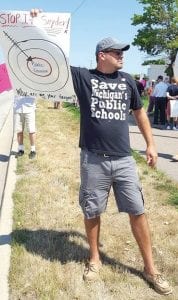 FLINT TWP. — School was briefly back in session on August 3 when more than 300 local educators held a protest at Genesee Valley Center mall to bring public awareness to a five-year legal battle with the state over misappropriated retirement funds.

It was one of ten similar protests held statewide spearheaded by the Michigan Education Association (MEA). Representation at the protest from 10-12 school districts in Genesee County and some from surrounding counties, was organized by the Flint MEA office, said Frank Burger, a group spokesperson, who also is president – Carman-Ainsworth Educators Association.

The public protests were intended to send a message to Governor Rick Snyder that he needs to stop wasting taxpayers’ money on attorneys, Burger said. 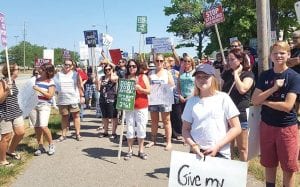 More than 300 local educators and supporters joined a recent protest in front of the mall to demand return of retirement funds they say were wrongfully withheld by the state.

On Tuesday, July 19, state attorneys filed another appeal with the Michigan Supreme Court, according to Anna Heaton, Press Secretary for Gov. Rick Snyder.

“This law was put in place to sustain retiree health care for public school employees, by requiring them to contribute a small portion of income toward their retirement care instead of taxpayers fully funding it,” Heaton said in response to a request for comment. “If school employees do not contribute toward their retirement health care, the funding for the system will have to come from other district resources, either the from the classroom or directly from taxpayers so that districts can balance their budgets.

A Supreme Court ruling will allow for finality on the issue either way so school districts can plan accordingly.”

The legal fight is over 3 percent with- held from school employees’ paychecks from 2010-2012, Burger said.

The MEA with the American Federation of Teachers filed a lawsuit challenging that PA 75 was unconstitutional.

On July 13, 2010, a trial court issued a preliminary injunction providing that the 3% levy be placed in an interest bearing escrow account until the matter is settled, according to a fact sheet on the MEA website. There is currently over $550 million being held in escrow, Burger said.

On April 1, 2011, the trial court ruled that PA 75 was unconstitutional. The state appealed that decision to the Michigan Court of Appeals, which upheld the ruling in August 2012.

An appeal filed by the state in September 2012 with the Michigan Supreme Court was remanded back to the Court of Appeals which again issued a decision in June of this year that the PA 75 is unconstitutional.

That led to the state’s recent application to the Michigan Supreme Court. If the Supreme Court declines to take the case, rules in the MEA’s favor, or remands it back to the lower courts, will likely result in the withheld funds being returned with interest, according to the MEA.

“Any disputes regarding eligibility, payment, and methodology will be decided in the trial court.” The amount each teacher is owed depends on their salaries during the two year period when the funds were withheld, Burger said. Burger said that local protesters at the mall received positive response from passersby honking their horns. At the end, Jimmie Joh’s provided them with sandwiches.