Local teens to perform during Festival of Flags 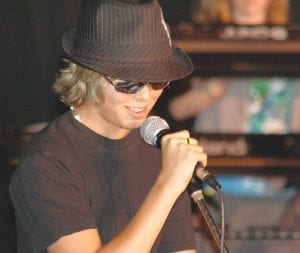 The group will perform July 23 from 4-5 p.m. following the Strongman competition on Main Street.

But Third Degree Burns does not sound like a karaoke concert or even the average garage band. Allyson Jackson, a two-year member in the band, belted out Pat Benatar songs better than most professional singers. Brian Jenkins, a one-year band member, casually performed the fastpaced, intricate guitar solo at the beginning of Poison’s song “What I Like About You” without missing a single note. 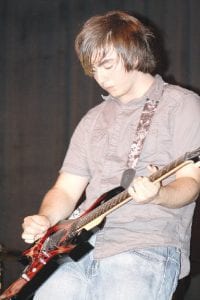 Levi Hannah rocks out with a guitar solo while Eli Ward (above, left) sings. Cheryse Burns (below) belts out the tunes at a Third Degree Burns concert.

Founded and led by Lapeer resident Gary Burns, students in the program learn how to play music along with everything else that goes with being in a band and putting on a concert. They learn about stage presence, how to banter and play to the audience, how to set up and take down all the technical equipment and amplifiers. They even learn about advertising and promoting a show.

It is all part of a dream Burns has for the students and the musical future of Lapeer. Earlier this year, Burns received nonprofit 501(c) classification for the Young Musicians Community, which is currently used to sponsor and fund the Third Degree Burns student band. Burns takes students, any young person who wants to play, and allows them to join the absolutely free program.

“I can get anyone to play in two months,” said Burns. He is not bluffing either. Several band members who performed at the PIX Theatre on Thursday have only been playing an instrument for two months, even though they look like they have had years of lessons. Students in the program meet regularly to practice and rehearse, performing regular concerts in the area. 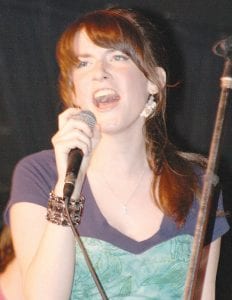 Gary Burns also presented two students with the annual Danielle Shipley Scholarship Awards during Thursday’s concert. Danielle Shipley was a student in the Third Degree Burns band before a fatal car crash in 2009. Burns established a scholarship in her name for graduating seniors for the Most Improved Performer and Most Accomplished Performer. This year’s Most Improved Award went to Trevor Harnden, a bass guitarist and keyboard player who has been in the band since 2007. The Most Accomplished Award went to Cheryse Burns, who performs lead vocals, backup vocals and plays the keyboard.

Third Degree Burns started in Burns’ basement six years ago. In that time, said Burns, more than 100 students have gone through the program.

Where other student band programs are costly and can provide varied results, Burns makes sure the program remains free to all of his students. He only requires that his students maintain good grades in school, be willing to work hard, and stay away from drinking, smoking and drugs.

Third Degree Burns is just getting warmed up though. Burns has a vision for the program that could very well make Lapeer the new musical center of the state. His vision is to raise enough funds for the creation of a two story building here in Lapeer, complete with a concert hall, recording studio and classrooms.

“If I can get two million people to know about it and send me one dollar, we’ll be all set. We can do it,” said Burns.

He wants to expand the program to encompass everything related to music. He is looking for professionals to teach students in the program not just how to play music, but how to run the sound board and lights, how to do photography, advertising and managing. Dance instructors can teach the students choreography while fashion designers can help with band members’ outfits. Burns hopes to find music producers who will join the project to run a recording studio so the students can learn about what goes into making a professional album.

While Detroit was once a major musical hub during the Motown era, Burns believes that Lapeer has all the potential of being the next musical hot spot in the state or even the nation. He said that Lapeer not only has an abundance of young talent, it is also situated right in the middle of Detroit, Flint, Saginaw and Port Huron. That locale makes Lapeer the perfect spot to draw in young musicians from all over. Already, Third Degree Burns has students from Davison, Lapeer, Imlay City, North Branch, Dryden, Almont, Oxford and Novi.

Right now, Third Degree Burns and the Young Musicians Community needs donations, along with professionals to donate time to teach and a Realtor to help find land for the non-profit organization’s new home. If the building comes to fruition, it could breathe renewed life into the Lapeer community and establish the area as a musical destination.